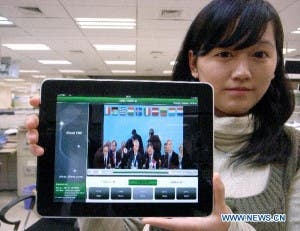 CNC World is a 24 hour a day iPad TV streaming service, which will bring the latest video news and highlights from around the world direct to your iDevice.

It won’t be just Chinese speaking iPad users who will be able to enjoy the app though as there is both a Chinese and ‘World’ version of the App. The ‘World’ version being in English.

Both apps are free from the iTunes store and will stream Chinese, and world news, weather reports, sporting results and special features 24 hours a day all for free.

I just had a quick go of the ‘World’ App and it’s a very nice and simple to use interface with quick loading times of the video. The video quality is also very good and can either be played full screen or in app.