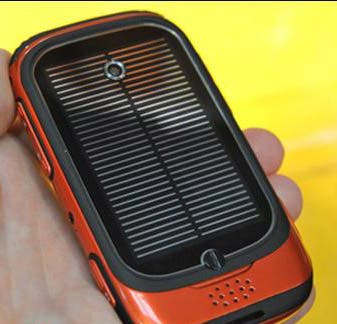 If you are out in the mountains, remote area or just forgot your charger. Having a flat cell phone battery can be a serious inconvenience, and in those remote areas a serious danger.
Obviously you can carry spare battery packs (unless you have an iPhone) but the ultimate set-up would be to have a phone which can charge using solar power!

More details and photos after the jump!

The idea of solar panel equipped phones is nothing new, Sharp have had them for a while now, but this rugged rubberized phone spotted at this years MWC is the first of a new breed of affordable solar phone.

Although pricing has not been announced estimates of around 1500 yuan have been floating around the web which seems quite reasonable for a rugged phone designed for the more adventurous techies.


On the tech side the screen is a 3.5 inch capacitive unit, the camera is a 3 mega-pixel model and a full charge from the sun should take around 17 hours, although the manufacture states a quick 2.5 hour sunbathe should be more than enough to keep the phone going in stand-by.