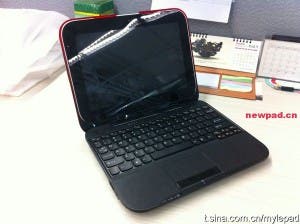 Lenovo have had a great year! The Chinese PC maker, and 4th largest in the world have just posted a 25% increase in profits for 2010 and to celebrate have finally announced they plan to launch the Android powered LePad!

The LePad will be priced at 3500 Yuan ($530) which is roughly the same as the 16Gb iPad price here in China, only the LePad features a double the on board storage, 32Gb.
The Lenovo Android tablet gets a 10 inch multi-touch capacitive screen and a 1.3Ghz Snapdragon CPU from Qualcomm.

The screen is detachable and can be used on it’s own as a 10″ Android tablet (running Android 2.2), then when connected to its base the LePad transforms to a Windows 7 powered netbook.

We hope to get our hands on the LePad when it launches so watch this space to read our impressions!
Follow us on Twitter for more Android tablet and Lenovo news.

Previous How To: Sync Your Mac to your Android Tablet and Phone