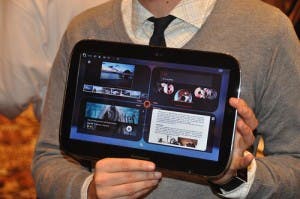 Lenovo are continuing it’s strategy to diversify it’s range of consumer electronics products away from just laptops and PC’s and have already launched a rival to the iPhone the Android based LePhone and are taking orders for the LePad Android tablet.

Lenovo are worried by the current tread with Chinese consumers which lead to a very small, 4%, growth in the PC market during the last quarter of last year, so is strengthening it’s line of living room based and portable products to keep up with the shifting trends.

The latest product to be announced is a Internet enabled Lenovo branded TV which will be developed in conjunction with Shanghai Media Group who will provide media content to the new web TV platform and own a 51% stake in the joint venture.

Lenovo expects more than 10 million Chinese consumers to be using internet enabled TV’s within the next 3 years and hope to be the first to enter the lucrative market.

In other news, Lenovo also intends to push it’s products in to the homes of millions of Chinese families with their soon to be launched controller-less gaming console, which will come with popular games developed by Tencent, makers of QQ.