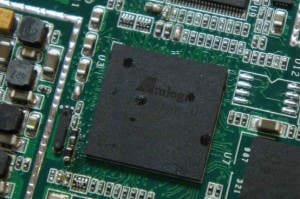 A large majority of Chinese tablet makers are waiting for dual-core CPU prices to drop and the Honeycomb nod from Google before they swamp the market with low priced Honeycomb tablets, but that doesn’t mean they are taking a break from development in the meantime.

A new low price, low clock speed, but surprisingly nippy single core unit, made by chip maker AM-logic has made its way on to the market in the past few weeks and we are now beginning to see tablets made with this great little CPU.

From a spec sheet point of view the latest AM-logic chips look extremely underpowered boasting speeds from as little as 500mhz to just under 1ghz, however thanks to a clever bit of engineering these lower speed and lower power consumption chips are surprisingly fast.

To give you an example of the power they have, we have seen 500mhz units happily playing 3D intense racing games or decoding HD video while hooked up to a large TV screen without slowing down. Tablets with faster AM-logic CPU’s (800mhz+) will happily handle HD video, Flash 10.2, 3D games and even allow for the installation of either Android 2.3 and later this year Android 2.4.

Best of all is the prices of these chips which currently sit below the $20 per chip mark meaning while low priced dual core tablets may be a while away, cheap fast and power efficient Android tablets are just around the corner.