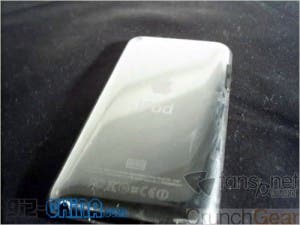 A number of very convincing images which reportedly show engineering prototypes of  iPod Touch 5’s have been posted on various blogs. While at a quick glance there doesn’t seem to be much difference between this 5th generation iPod Touch and the current iPod Touch 4, a closer inspection reveals a few surprises!

The biggest surprise is that the images shown here seem to show an iPod Touch 5 prototype with a capacitive home button rather than a physical one. This could mean that the whole lower part of the Touch 5 could be an extra multi-touch area supporting the main touch screen.

The second surprise is the huge jump in storage. Current iPod Touch storage max’s out at 64Gb but the model shown here has a whopping 128GB!

Other details were also leaked showing the back of the device to be alloy, the iOS version as 4.2.1 and the serial number as being MC550LL.

We will bring you more iPod Touch 5 news as we get it!