Chinese manufacturers seem to have sensed the change of times at Google towers and before the developers of Android decided to keep hold of their first ever tablet optimized Android OS, the engineers in Shenzhen had turned their attention to tablets running both Windows 7 and Android 2.2/2.3.

This is the 2nd dual boot we’ve seen in as many days and like yesterday’s tablet the one pictured here looks like a really excellent product.
The design is not that dissimilar from the Viewsonic dual boot tablet, which isn’t a bad comparison at all as the Viewsonic is also a handsome device. 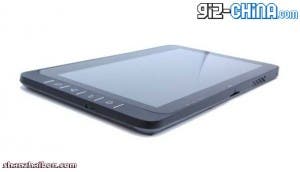 Like the other dual booters this tablet get’s an Intel Atom CPU, 1Gb DDR3 RAM and a 16Gb SSD hard drive.

As for the other features, we know as much as we can make out from the photo here, which seems to show a 3G SIM card slot, buttons for both Windows and Android operation plus a built in web camera.

While these dual boot Atom powered tablets are gaining in popularity, and those little Atom CPU’s can still hold there own against more modern chips, Nvidia Tegra 2, we are unsure just how compatible the Android OS will be with an Intel chip as, as far as we know there has yet to be an X86 version of Android that’s fully functioning available yet.

However we’re sure the gadget masters in China are able to get all the kinks out in a relatively short time, so expect more dual boot Android/Windows Tablet news!

Previous iPhone 44G Video A Funny Look at the iFuture