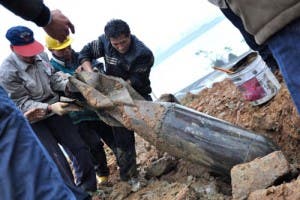 A 1.7 meter bomb was unearthed on Wednesday at a construction site in Liuzhou, South China. Judging by the condition of the 500kg bomb local officials believe it was dropped by Japanese forces during conflicts between China and Japan.

The extremely large and possible dangerous bomb was moved by workmen to a factory in the countryside where it will be destroyed.