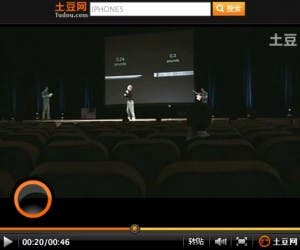 Ok before you think I’ve gone completely bonkers, I personally believe this video to be as genuine as the existence of the ‘Mongolian Death Worm’, but I felt I had to post the ‘news’ anyway.

The video below, which has apparently been removed from other video sharing sites, claims to show Steve Jobs rehearsing the keynote for the iPhone 5 launch.

The video shows ‘Jobs’ introducing the iPhone 5’s new ‘Scent Technology’ which will enable users to send smells to one another! Claims the iPhone 5 has a built in solar charger and the new phone will weigh 109 grams!

There’s no way that Apple will allow a technology in to the new iPhone which could bring a whole new genre of fart apps to us! Is there?!

Next Lenovo ThinkPad Tablet Shows Up