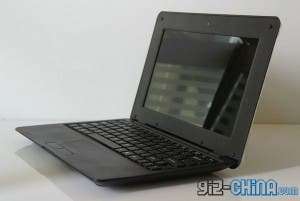 Netbooks were once all the rage with those wanting cheap ultra-portables, but with the increased quality and popularity of tablet devices the little net-book has taken a back seat to the touch screen ‘New Kids On The Block’.

But, this little Macbook Air clone might be just the thing to rekindle the Net-book flame.

AMLogic chip’s are usually found in Android Tablets, but it’s inclusion in a Net-book that runs Android makes sense as it is a lower power consumption CPU, which can easily handle browsing the web and is more than happy with the odd bit of Flash content or HD video.

Other details claim this little Android powered netbook has a monstrous 12000mAH battery! That would give it a battery life of about 20 hours, however for the price, 500 Yuan ($76) it is more likely to be a 1200mAh battery, which should see 3-4 hours of light use.

Next iPhone 5 To Get ‘Scent Technology’ and ‘Solar Charger’ Video