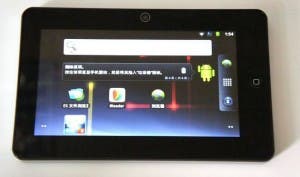 The DroPad 7-inch Android tablet has been a long favorite among us here at Gizchina due to it’s giant iPhone styling, great screen, Samsung CPU and low price.

For 2011 the makers of the DroPad have blessed their 7-inch tablet with a Gingerbread update, which gives the already potent little tablet a performance boost and also improved energy management, while also dropping it’s price to a bargain 980 Yuan ($151).

As you can see from the pictures here the 7-inch tablet has a very bright and colorful capacitive touch screen with a distinctive iPhone 4 style design, and front facing camera.

The CPU, as mentioned above, is a Samsung unit which is clocked at a snappy 1.2Ghz and has 512mb RAM to help it play 3D games and HD video with out buffering and stalling. Speaking of HD video, you can either enjoy video and gaming on the great built in screen or on a TV via the built in HDMI out.

The DroPad is really a great device and now an even better buy than before thanks the cheaper price and upgraded OS.

Previous No Android Market? No Worries!

Next White iPhone 4 Nano Hands On