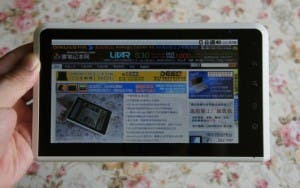 Heiner have just announced that its next generation M9 7 inch tablet, due next month, will be powered by a new Cortex A9 based CPU sourced from Japan.
The news comes as quite a shock, as most other Chinese tablet makers are looking in to producing Nvida Tegra 2 based tablets, it seems a bit of a gamble for Heiner to be going for chips made by the unknown Renesas Japanese chip maker.

In fact Renesas is actually a sister company to the much larger and more famous NEC brand!

While dual core CPU’s generally mean faster speeds, the CPU which Heiner will be building the new (white) M9 will only be clocked at a modest 533Mhz, but is said it will bring huge benefits to battery live and the overall stability of the tablet.

Other details for the Heiner M9 are; Bluetooth, GPS, built in 3G, 512mb RAM, 4GB built in flash NAND storage, 7 inch capitative screen with multi touch and a quite large 3500mAh battery.

We will bring you more on the dual core Heiner M9 as we get it.