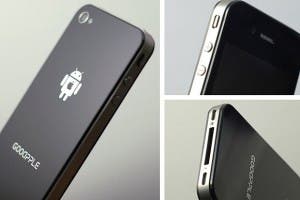 If you have been reading Gizchina for some time, you may well have come across the wonderfully cheeky GooApple. Well here’s it’s 3G brother with full video review.First of all enjoy the below video in Chinese, then read what the bloke said below:

Basically what he is telling us is as follows.

This model of the GooApple runs Android 2.2 Froyo on a Qualcomm 600Mhz CPU. While that may not sound like much, gaming and video performance are surprising good! (see second video below).
The screen is a 3.5 inch capacitive model with a rather low resolution of only 480 x 320. There is a 2 mega-pixel rear camera and a fake (non functioning) front camera.
Wifi and 3G are all there, as is a personal hotspot function, plus that glorious Android based fake iOS!
Power comes from a rather tiny, due to the thinness of the iPhone 4 clone body, 1000mAh battery.

The big draw to the GooApple 3G though is that amazing U and perfectly replicated iPhone 4 body. If you or I weren’t told that this was in fact a clone before watching the video I’m sure we would never have guessed!

It truly is an amazing clone, probably the best iPhone 4 clone to date!

Pricing is currently around 1500 Yuan ($230) which is roughly half of what a real iPhone 4 would cost in the US and about a quarter of what the Apple iPhone 4 sells for in China!!

Previous Meizu M9 Gets CE Approval! Could Possibly Go on Sale in Europe!