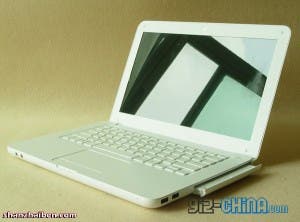 This isn’t the first Macbook clone found in China, and judging by the popularity of the knock-off Apple laptops, it won’t be the last, however this new counterfeit Macbook boasts one feature previous clones lacked! A multi-touch trackpad!

If you were to see this white plastic bodied laptop out in the coffee shop, or at a computer store you would easily mistake it for the white Macbook. Only on closer inspection would you notice the lack of glowing Apple logo, but even without that the similarities are striking!

The big selling point of this knock-off white Macbook is the multi-touch trackpad, something which previous clones didn’t get. The fake Macbook supports 2 and 3 finger gestures, meaning you can 2 finger scroll and swipe through web pages just as you would on a genuine Mac laptop.

Under the plastic exterior hides some rather unimpressive hardware. A 1.8Ghz Intel Atom CPU runs the show with 1Gb RAM and 160Gb hard drive providing the memory.

Battery power comes from a 3500 Mah battery, which won’t last very long with brightness turned up on the 13.3 inch 1366×768 resolution LCD screen, and even less so if you use the built in DVD burner!

However if you’re just after a cheap laptop that happens to look like an Apple and does a great job of web browsing and other light computer work this Macbook knock-off could be exactly what you’re looking for! However we still prefer this awesome Macbook Pro clone!

Contact us for more details about this white Macbook clone!

Next What do this Hong Couple love more?