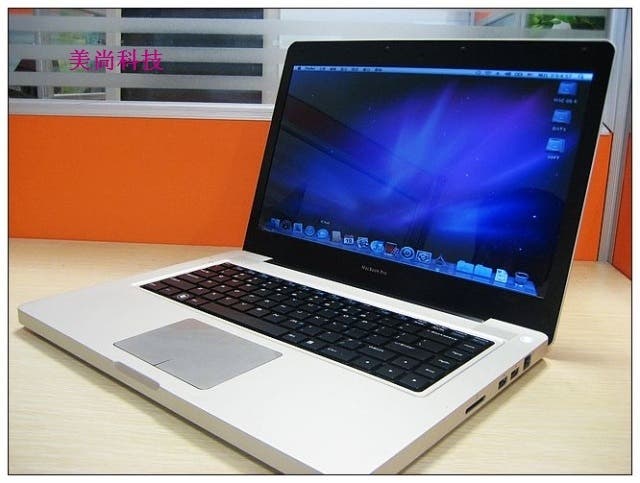 We’d already reported on the availability of a Macbook Pro clone from Chinese company Qingting (aka Dragonfly) . The variant we covered however sported a Dragonfly cut away logo in the lid and ran Windows 7.
This clone, supposedly from the same factory, has dispensed with the niceties slapped on a trademark Apple logo and had OSX 10.6 bunged on to it’s hard drive. 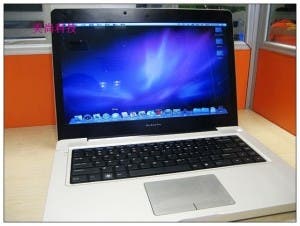 There are some tell tale signs which distinguish this from the real model, the look of the keyboard for example, the inclusion of a Windows key, double trackpad buttons and a VGA out, but that’s about it. At a passing glance or to the untrained eye this clone could easily pass for genuine even down to the unibody aluminum construction, built in battery and faux Magsafe charger! 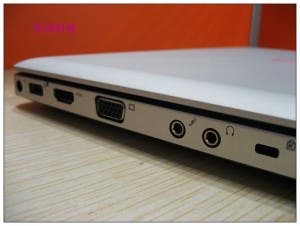 Despite the external appearance giving the real Macbook Pro a run for it’s money, the internals aren’t up to taking on a real Pro. Everything you would expect to find in your average net book has been crammed inside the unibody shell, meaning you’ve only got a 1.6 Ghz Intel Atom CPU and a maximum of 2 Gb of RAM. There is a welcome option for a 500Gb hard drive plus there’s a built in 3G SIM card tray though, plus that Atom CPU should see that built in battery doesn’t run dry too quickly.

Screen wise you get a 14 inch model on this clone compared to the 13.3 inch screen on a comparable Pro, yet the clone manages to weigh less with that slightly larger screen. The clone weighs in at only 4.1 pounds where as the the Macbook Pro 13.3 weighs 4.5 pounds.
The Macbook Pro clone running OSX 10.6 is available online now starting at 2900 Yuan ($436) rising to 3300 Yuan ($496) depending on hard drive options.
Follow Gizchina on Twitter to keep up to date.

Next Beijing's most flamboyant Gamer Spends 15k To Play By Himself!

Apple will simplify the naming strategy of the Mac product line