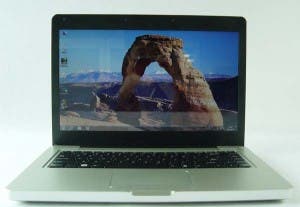 Here is China’s Macbook Pro clone as promised! Unfortunately it doesn’t look quite as good as the concept images, but it’s still a fine looking laptop.
Instead of the iconic Apple logo there is a rather stylish Dragonfly cutout, which lights up just as a Mac’s Apple logo would.
There are two models of the Macbook Pro clone available one is a 11.4 inch screened Atom powered netbook and the other is this 14 inch screened, also Atom powered 1.66 GHz (a 1.83 GHz is in the works) laptop. Both feature an alloy-magnesium shell, but the 14 inch gains a slot loaded side mounted DVD drive ala Macbook.

The QTpro, as the 14 inch model is known also features a multi touch, multi gesture track pad, SD card reader, plus a VGA out.

Once opened you’d have a hard time telling this apart from a real Macbook Pro from a distance. The screen has the same black surround complete with a nicely blended in web cam. The keyboard does look a little cheap, however as do the two stereo speakers.


The current Atom N450 1.66GHz QTpro supports up to 2 GB of ram which will be more than enough for most Internet based activities. If you’re wanting to do a bit more with your faux Macbook Pro you might want to wait for the upcoming Atom N470 1.83 Ghz model which will support 4 GB of ram.
Read Also:  Apple Music is coming soon to Tesla vehicles

Overall it’s a great looking laptop for those who want the Mac look without the Apple Tax, however the Atom processor is a bit weak and we would like to see a more competent CPU in it’s place. Price are yet to be released but expect around 3000-4000 RMB!