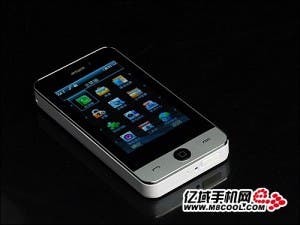 It  hasn’t taken the cloning crowd long to take Gizmodo’s infamous iPhone 4G pictures and specs and turn them in to real live iPhone knock-offs!

As you can see from the pictures the device looks very similar to the prototype phone gadget blog Gizmodo reportedly paid upwards of $5000 for!

Instead of the prototype’s glossy black finish this clone has gone for a nice whith apparel white a nice square edgy feel to it. It also has 2 more face buttons than the iPhone, a call and cancel button located either side of the ‘home’ button.

Specifications and price are still unknown, but we do know it has dual sim card slots, a replaceable battery and a front and rear facing camera, meaning it will also run on China’s new and increasingly popular 3G network.

Overall it looks good, but that O.S needs a serious spit and polish!!

Next Terminator Joins Forces with Microsoft to Bring Down Apple