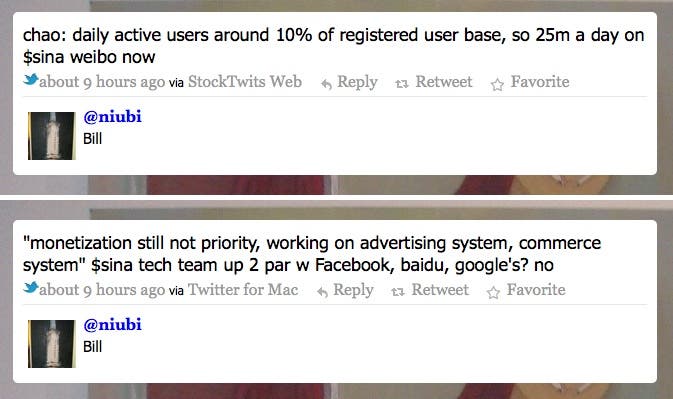 We have already reported on Sina reaching the staggering figure of 250 million registered users, but Sina must have thought the news was worth releasing again as they announced the figure at their quarterly earnings call earlier today.

Charles Chao, Sina’s CEO had some interesting things to say about Weibo such as 86 million messages a day are sent on the service but that number is growing slowly partly due to anti spam software, and the company are not rushing to moneteize the service with adverts or other commercials.

Now, if you are thinking Sina are mad not to start milking the cash cow that 250 million registered users represents, their lack of commitment to do so might will be to do with the fact that only 10% of those users are active on a daily basis!

25 million active users doesn’t sound quite as impressive as 250 million, which is actually equal to half the the entire Chinese online community, so I guess Sina don’t want really want to concentrate on that too much!

Earlier this year Sina also launched a live search service for Weibo allowing users to keep up to date with the latest news as it happens, and they also launched an English version of the Weibo application together with an International Weibo service (which I still can’t log in to!)