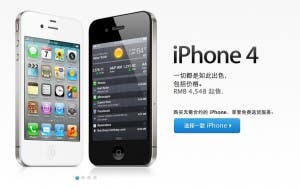 With the iPhone 4S’ launch just around the corner on 11th November (in Hong Kong at least) mobile carriers are offering great deals on the older, but still damn good, iPhone 4!

China Unicom, are currently offering the newly released 8GB version of the iPhone 4 for a slightly cheaper 3999 Yuan ($630), but if you feel like spending a little more you can get a an iPhone 4 8GB for Free……

While the above sentence may sound like a total contradiction, it is to a certain extent true. Customers in China who wish to commit to a 3 year contract with China Unicom can get sleek black iPhone 4 for free! Well, that is if your are also willing to fill the phone up with an initial credit of 4999 Yuan ($788).

After forking out more than the price of an iPhone 4S on your ‘Free’ iPhone 4, you may well think the spending is over, alas this isn’t the case as you will be expected to use at least 186 Yuan ($29) per month on your 3G service if you want to keep hold of your iOS handset!

The deal dosen’t sound as much of a deal than a bit of a rip off, but if you use 3G quiet heavily the contracted, free iPhone 4, may well be worth a look.

When will the iPhone 4S officially go on sale in China?

In the meantime Chinese Apple fans are still waiting faithfully for the iPhone 4S to arrive but an official release date has yet to be announced!

The general thought is that the iPhone 4S will go on sale with China Unicom before the end of the year and will likely cost 4988 Yuan ($786), which is slightly less than the iPhone 4’s retail price in China, but still 800 Yuan ($126) more than the base model 16GB iPhone 4S will cost in Hong Kong.

However the launch really is anyone’s guess as the iPhone 4S still hasn’t received the official certification allowing it to go on sale in China yet from the MIIT!

Next Sina Weibo Reports 250 million users (again!) but is anyone really using it?