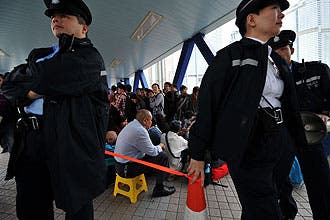 The iPhone 4S officially goes on sale in Hong Kong tomorrow morning at 7am, but the excitement, suspense and carnage already started last night and seems to be continuing today.

Reports now suggest that more than 3000 would be iPhone 4S fans are currently outside the newly opened Apple store in Hong Kong, however Apple are only recognizing the first 1250 people as eligible customers!

What’s more, police and security companies have been brought in to ‘manage’ the situation by creating human sheep pens for groups of people to wait in. Obviously this has done nothing for peoples moods and tempers have been flaring with minor scuffles breaking out.

Last night police were called to the Hong Kong Apple store to evacuate people who had began lining up a day and a half early for the iPhone 4S launch, but thing turned nastily when a gang of professional ‘queuers’, also known as scalpers, for Southern Asia turned up and started threatening locals.

Watch the latest from the iPhone 4S Hong Kong Lines!

Well we with those brave soles who have decided to camp out tonight for the iPhone 4S good luck and hope that no violence breaks out again as it did last night!