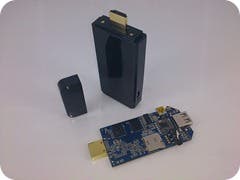 Following on from the success of the Raspberry PI a Hong Kong based electronics group have produced their own “Android on a Stick” uPC device which can turn you existing TV or PC monitor in to an Android based computer!The uPC Android on a stick looks and operates just how you would expect. The whole unit is housed in a casing not much larger than a USB thumb drive and once attached you your existing TV turns in to an Android based media PC.

The idea follows on from the success of the recently launched Raspberry PI, which has seen sales topping 60,000 a day!, however there are some quite noticeable differences between the Raspberry PI unit and this Android on a stick.

Off the bat the Android on a stick unit is much smaller than the PI, but not only that but the smaller form factor actually houses some quite impressive hardware such as a dual core ARM Cortex A9 CPU running at 533mhz, 512mb RAM, 4GB built in storage, built in Wi-Fi and a built in microphone.

The addition of Wi-fi, built in memory and a microphone are obvious advantages the Android on a stick offers over the Raspberry PI, these and also the fact the Android operating system has thousands of fantastic apps and games just waiting for the chance to be unleashed on your wide screen TV!

There has been no mention of a retail price as the unit is being as an OEM unit, however we guesstimate from the prices we’ve heard that Android on a stick could be on the market at around the $70 price mark!

If you would like more information about Android on a stick or any of the other Chinese made gadgets and devices we feature on Gizchina.com, contact us now!

Previous Apple's New iPad Gets Unboxing and Hands on Video Before Launch!

Next Could this Xiaomi Clone Be Better Than the Real Thing!