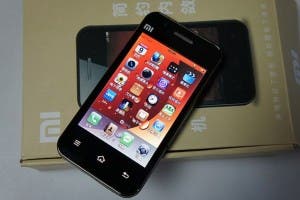 We like the Xiaomi M1 Android smartphone here at Gizchina. It has a great camera, tons of RAM, a powerful CPU and a low price, but there are a few things missing such as a front camera, choice of colours and dual sim, features which this clone Xiaomi packs!Xiaomi M1 clones are nothing new, but this one really grabs our attention as the makers have decided not to just knock off the original Chinese Android phone, but to actually improve upon it!

However as you can probably tell by the price this Xiaomi M1 knock off lacks some pretty critical components to actually make it a worthwhile purchase.

For a start the OS isn’t Android but rather a shoddy iOS looking Java based OS, the rear camera is more like a 0.8 MP unit rather than 8 mega-pixel lens, and the CPU and RAM are nothing compared to the real Xiaomi’s 1GB RAM, 1.5GHZ dual core unit.

Take a look at the dual sim, front camera equipped Xiaomi M1 knock off in action in the video below!

Previous Forget Raspberry PI How About Android on a Stick!

Next Knock off Macbook Air Gets a 14inch Update!