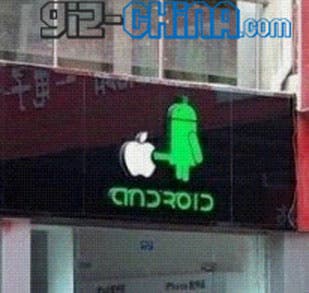 When it comes to smartphone’s you probably in either the iOS or Android camp and while like most rational people you can see the merits of both operating systems there are always going to be the fanboys who take things a step to far. Which brings us to this store sign spotted in China!

What’s is more amazing about this amazing piece of Apple bashing is the fact the Android store featuring this graphic logo is situated right next door to an Apple store (picture below).

Both Apple’s iPhone and the various versions of Android smartphone have captured Chinese consumers hearts and minds over the past year which occasional erupts in deranged violent egg flinging mobs, or in this case a Apple logo casually handing our a blow job to an Google Android droid!

Thanks to Alberta for sending this in!

Next Chinese Android Fans Put Apple in Their Place!