It’s been an exciting day for fans of Android phones as China’s Xiaomi have released not 1 but 2 fantastic phones! Keep reading for full details of the Xiaomi M2 the world’s fastest quad-core phone!

A lot of what was officially released this afternoon at the Xiaomi M2 launch conference was already known and reported by us in the past days and weeks! But it is nice to finally know just how good the quad-core Xiaomi M2 is! It is AWESOME! 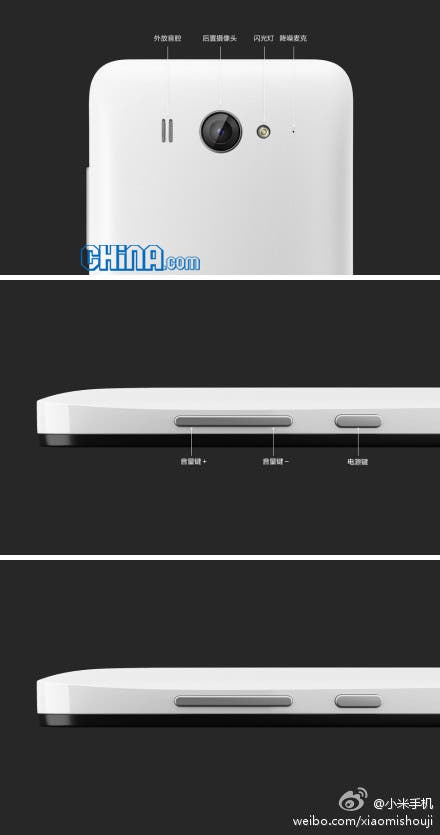 The design of the Xiaomi M2 was something I was personally worried about. We had rumors and photos suggest odd 2 tone phones, and designs which looked just like the Xiaomi M1 (which have actually turned out to be the Xiaomi M1s).

Thankfully though Beijing based Xiaomi have done us proud and wrapped the world’s fastest quad-core Android phone up in an extremely handsome body.

Fans of Chinese phones will already be pointing out the similarities between the M2 and Meizu’s 4-core MX, but rest assured that although the 2 phones look similar they are completely different beasts!

The Xiaomi M2 measures in at 126mm x 62mm x 10.2mm and weighs in at 145g. So while the M2 isn’t the thinnest or lightest Android phone on the planet it s certainly no porker either, and it very much is the fastest!

Like the Meizu MX the rear of the new Xiaomi phone is a glossy white plastic with an 8 mega-pixel rear camera sitting in the center with LED flash for night photos and a small speaker grill which should aid audio while capturing video.

The front of the Xiaomi M2 though is distinctly Xiaomi in design meaning there are no physical buttons on the face (there is a physical volume rocker and camera shutter button along the edge though).

Also new for Xiaomi is the front camera which is located in the top right hand corner above the screen (more on the cameras below). 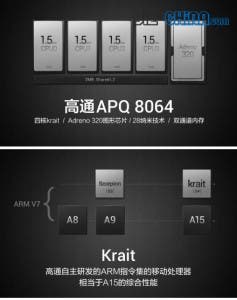 We already knew the Xiaomi M2 was going to be one powerful device as we had already seen these leaked benchmarks, but it was nice of Xiaomi to confirm our suspicions today.

The Xiaomi M2 is now officially the world’s fastest quad-core phone, which is pretty impressive for a company only on their 2nd device, and for a phone which only costs $313 (1999 Yuan)!

What’s giving the Xiaomi M2 it’s world class level of speed and performance is a combination of both hardware and software.

The CPU is a Qualcomm Snapdraggon 8064 CPU quad-core chip clocked at 1.5ghz, so it is like 2 of the original Xiaomi’s strapped together and then attached to a ballistic missile when it comes to processing power!

To prevent any lack of memory to the powerful CPU, Xiaomi have been extremely generous and have given the M2 a full 2GB RAM and 16GB ROM.

This all adds up to a quad-core phone which is hugely powerful and capable of leaving other top of the range quad-core devices such as the HTC One X and Samsung Galaxy S3 spitting dust!

With all this power on tap you would be right in thinking the Xiaomi M2 will make for a very capable gaming phone with some who have tested the phone and are familiar with all the hardware suggesting the M2 is on par with the Xbox 360 thanks to the Adreno 320 graphics chip. 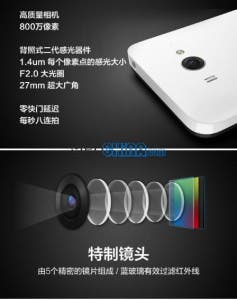 The M2 has 2 cameras this time which means you can take photos of your friends and also nice photos of yourself posing. In fact Xiaomi have really gone to town with the front camera which is a 2 mega-pixel unit capable of capturing 1080p HD video!

The rear camera on the M2 is also able to capture 1080 HD video, but is a much more capable 8 mega-pixel unit. While some might feel that 8 mega-pixel camera’s are a little last generation, Xiaomi have gone to great lengths to ensure the M2’s camera is the cream-de-la-cream of camera phones.

One of the highlights of the rear camera is that it features an f 2.0 apperture and is capable of shooting video at 90fps! The lens has also been improved to give better wide-angle ability.

According to those at the event the photos from the Xiaomi M2’s rear camera are absolutely stunning! 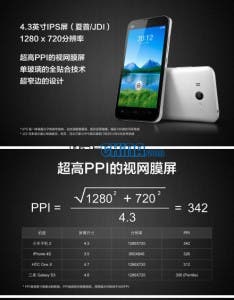 Not content with producing the fastest quad-core Android phone, Xiaomi have decided to give the M2 a very impressive 4.3 inch display!

How impressive? Well according to the specifications the screen on the M2 is much better than the retina display used in the current iPhone 4S and boasts a resolution of 1280 x 720 and 342PPI.

The M2 also packs some other impressive features which we would feel lucky to find on an Android phone costing double it’s price.

If you like your phones to have all the bells and whistles then the Xiaomi M2 is definitely looking like the quad-core Android phone for you! 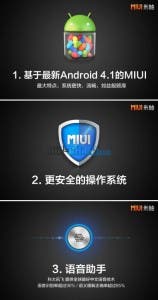 Another awesome surprise is that the Xiaomi M2 is going to be China’s first ever Android 4.1 Jelly Bean phone, but this isn’t any ordinary Android Jelly Bean ROM, but instead the latest version of MIUI V4 based on Jelly Bean.

MIUI 4.0 Jelly Bean brings a ton of great features especially to users who really like to customise the look, feel and function of their phones.

One feature we really like is the “freestyle desktop” which you can set up work whichever way you like to access your home screens, with options to have them move left and right or up and down, then there are the many custom touch gestures to further optimise the feel and get it just right for you.

Many of the new MIUI 4.1 features seem to be a little Apple inspired, for example the new voice assistant on the M2 offers dictation and will follow commands much like Siri, however as the Xiaomi system is based on iFlytek’s voice recognition software it should work much better for Chinese speakers.

Again like Apple and their iCould service Xiaomi have included their MiDrive software which allows users to back up or store, photos, files and apps in the cloud!

This is a great function and one I’m really excited about especially with the Xiaomi M2’s great gaming performance.

Wi-fi streaming does exactly what you would expect and streams content, photos, music, videos and games from your M2 to your Android enabled smart TV which is great as it doesn’t require additional hardware to work! 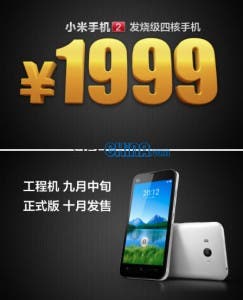 The good news is the Xiaomi M2 is not only the world’s fastest quad-core phone but it is also one of the cheapest at only $313 or 1999 Yuan, the bad news however is the M2 won’t be available until October this year and there has been no announcement yet if there will be an international release!

I think that pretty much covers most of the important points that were brought up at today’s Xiaomi M2 launch, if I’ve missed anything please feel free to let me know in the comments section below.

Also, what do you guy’s think? Are you tempted by the M2 and it’s low cost quad-core goodness?