The Xiaomi M2 launch event is only an hour away, but you don’t have to wait until 10am to get the official specifications as they have already been revealed by eagle eyed reporters at the Beijing event. Keep reading for official Xiaomi M2 specifications!

The photos below were taken by reporters from Micgadget who are are the Xiaomi launch event. As you can see the banners are easily visiable and list key specification highlights and features of the next generation Xiaomi phone.

According to the banners at the Xiaomi M2 launch the quad-core Xiaomi phone will feature a Qualcomm Snapdragon APQ8064 quad-core processor clocked 1.5 GHz,  a 4.3inch IPS display with a pixel density of 342PPI, 2GB of RAM, an 8 mega-pixel rear camera and a 2 mega-pixel front camera while it wil ship with the latest version of MIUI based on Android 4.1 Jelly Bean! 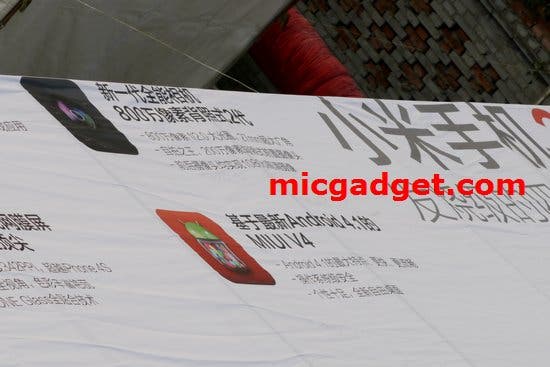 The design of the Xiaomi M2 looks to be similar to the Meizu Mx, complete with white back, but with the rear camera located on the side rather in the center!