We’ve got a lot of expectations for the next generation Xiaomi Chinese phone, but one thing we did expect would be the fact the new Mi2 be a beast of a phone which out performs even the Samsung Galaxy S3!

While we’ve known for sometime that the Mi2, or M2 as it may still be called, will be the second Chinese phone to use a quad-core CPU behind the MX 4-core, we haven’t really had any idea of just how powerful it will be up until today!

According to a report over at Xiaomifans, leaked documents from Xiaomi show that the internally named Xiaomi Mi2 is running a quad-core 1.5GHz Qualcomm Snapdragon APQ8064 quad-core processor and according to leaked quadrant results easily blows away the Samsung Galaxy S3 and it’s quad-core 1.43GHZ Exynos 4412 cpu.

This isn’t only bad news for Samsung, who are currently investing alot in to promoting the S3 in China, but it also bad news for Meizu and their 4-core MX which runs the same Samsung chip as the Galaxy S3!

Xiaomi Mi2 vs Samsung Galaxy S3 vs HTC One X 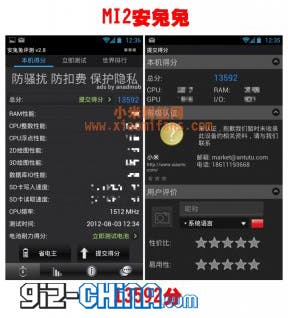 Although it’s not clear from the photos here (I’m currently looking for a larger image) the Quadrant score for the Xiaomi Mi2 is a whopping 7767, while the Galaxy S3 5480 and the Tegra 3 powered HTC ONE X scores only 3631 points.

Vellamo scores also confirm the Xiaomi M2 is a capable of driving circles around the S3 and HTC One X with a score of 2530 points. The S3 and One X score only 2072 and 1660 points.

NenaMark2 results have the new Xiaomi phone running at a huge 60.1fps, while the others trial behind with the Samsung Galaxy SIII running at 58.7fps and HTC ONE X managing only 46.5fps.

From these performance figures alone it looks like the Xiaomi M2 quad-core is going to be THE phone to have, and might be enough to push me away from the Mx 4-core for my next phone!

Best of all though is that more reports are still suggesting the Mi2 will cost just 2600 Yuan! Making the next generation Xiaomi phone one of the cheapest quad-core Android phones on the market and the most powerful! 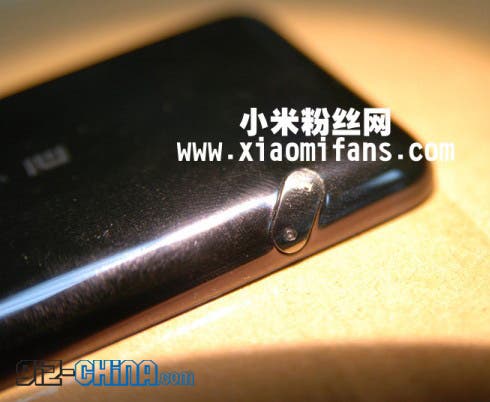 As an extra treat we also have the latest spy photo of the Xiaomi M2 also which claims to show the camera shutter button on the new quad-core Chinese phone. If this photo turn out to be the real deal the Xiaomi M2 is going to have a rather rounded profile and could look like those MX styled leaked images we showed you here.