Chinese tablet brand Onda have launched their V712 which they are touting as China’s Nexus 7 only ‘thinner, cheaper and easier to hold’. Keep reading for more details of this dual-core $100.

Right of the bat Onda aren’t pulling any punches, actually they are aiming right at the jugular of the Nexus 7 tablet with the V712’s advertising campaign which boasts that this Chinese tablet is ‘Thinner, cheaper and easier to hold’ when compared to Google’s Nexus 7.

Like the Nexus 7 the Onda V712 is a 7 inch tablet but rather than getting a quad-core Tegra 3 CPU pack it’s punch from a lower cost dual-core 1.5Ghz unit along with 1GB DDR3 RAM. 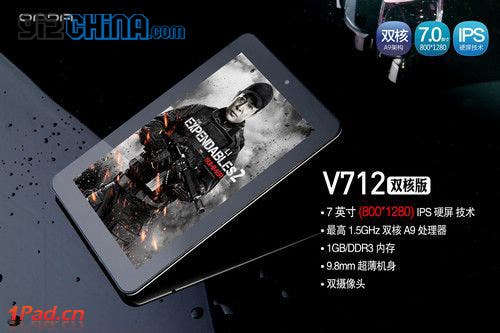 As the advertisement claims the Onda tablet is in fact thinner than the Nexus 7. The Onda V712 measures 9.8mm while the Nexus 7 is 10.45mm, it’s also slightly lighter too at 320g while the Google tablet weighs in at 340g.

Other differences between this ‘Chinese Nexus 7’ and the real thing are the dual cameras on the Onda, Android ICS rather than Jelly Bean but more importantly the 3G option which many Nexus 7 owners wished there was!