We reported last week that Newman are planning an updated quad-core phone, now today we receive further information along with rumoured specification details of the new quad-core Newman N2!

Newman  are very new to the Chinese phone scene but have already wow’d a great number of local and international Chinese phone fans with the Newman N1, a 4.5 inch screen, dual-core MT6577 phone running Android 4.0 ICS, and it they look set to stun us again with the N2.

While we still have no idea what the quad-core Newman N2 will look like we have received details of it’s rumored specification and release date. 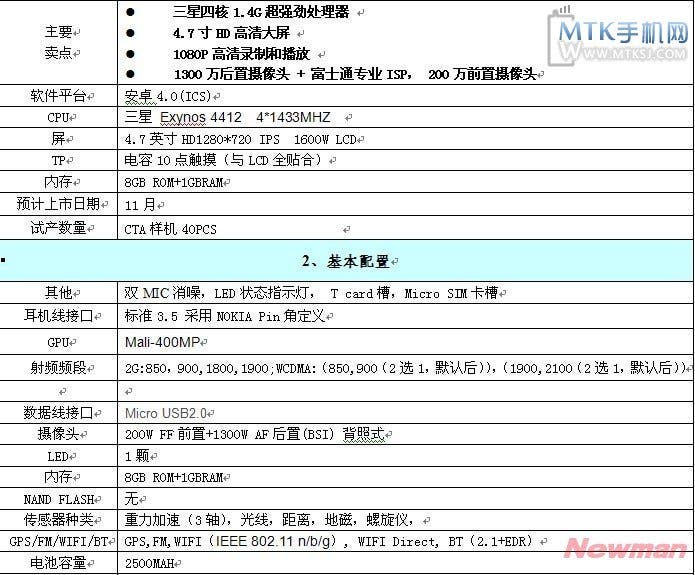 According to these reports, the Newman N2 will come equipped with a Samsung Exynos 4412 quad-core 1.5GHZ CPU, the same chip running the current Meizu MX 4-core and Samsung Galaxy S3, and will also feature a 400Mhz GPU, 1GB RAM and 8GB ROM.

Not only will the new Newman N2 quad-core be faster than the current MT6577 equipped N1 but it will be also larger thanks to its 4.7 inch display with a resolution of 1280 x 720.

Actually scanning through the leaked details of the N2 and it all looks good and reads like the perfect low-cost Android Chinese phone! It has a 13 mega-pixel rear camera with a 2 mega-pixel front, a large 2500 mAh battery, and all the usual smart phone features such as GPS, Wi-Fi and Bluetooth!

In fact the only part of the leaked Newman N2 which could be classed as bit of a disappointment is the fact that it has been listed with Android Ice-cream Sandwich rather than 4.1 JB.

According to the info we have gathered the Newman N2 will be launching next month and I expect prices to start around the 1999 Yuan ($313) mark.

Next MediaTek launching 8 Core MT6599 with LTE Early Next Year!