I’ve been suitably impressed with my Pipo Mx Android tablet with its dual-core CPU and Android Jelly Bean OS, but the new, improved, faster and larger quad-core Pipo Max M3 appears to be even more impressive!

According to the specifications I have been sent, the next generation Pipo Max M3 Jelly Bean tablet will boast some significant upgrades over the already impressive Pipo M2!

First of all the overall size of the new Pipo Max M3 is larger than the M2 and get’s a 10.1 inch display with a resolution of 1280 x 800 which should please those of you looking for a slightly larger Jelly Bean tablet. 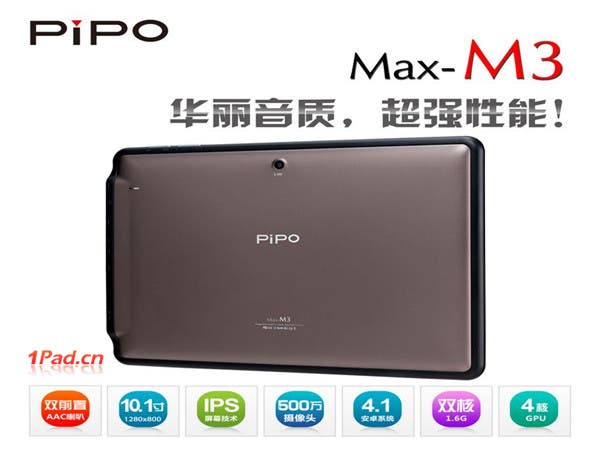 Like the M2 the Pipo Max M3 has a 1.6 GHz Rockchips CPU with 1GB RAM, so performance is not going to be an issue with this new tablet.

Although I have heard rumblings in the past that the Pipo M3 will support 3G this doesn’t seem to be the case, but like all tablet the M3 does have Bluetooth, WiFi and various plugs for HDMI, Micro USB and a micro SD card reader.

Prices in China will start at $200 but expect resellers to be charging closer to $280 once the Pipo Max M3 goes on sale.

Previous The Colorfly CT131 Tiny is a 13.3 inch tablet with quad-core CPU