Well the 13th of November has been and gone and rather than Meizu unveiling their latest Android phone, they have instead announced where and when the new Meizu MX2 will be shown off first!

After the teaser images Meizu released with today’s date on many Meizu fans were left guessing where the new 4.4 inch MX2 would be launched. Some guessed the Meizu factory while other correctly guessed the Watercube in Beijing!

So if you are in Beijing on the 27th November be sure to head down to the Watercube to take part in the festivities I’m sure it will be a good one with plenty of giveaways for die-hard Meizu fans! Click here for directions and to see the Meizu MX2 countdown. 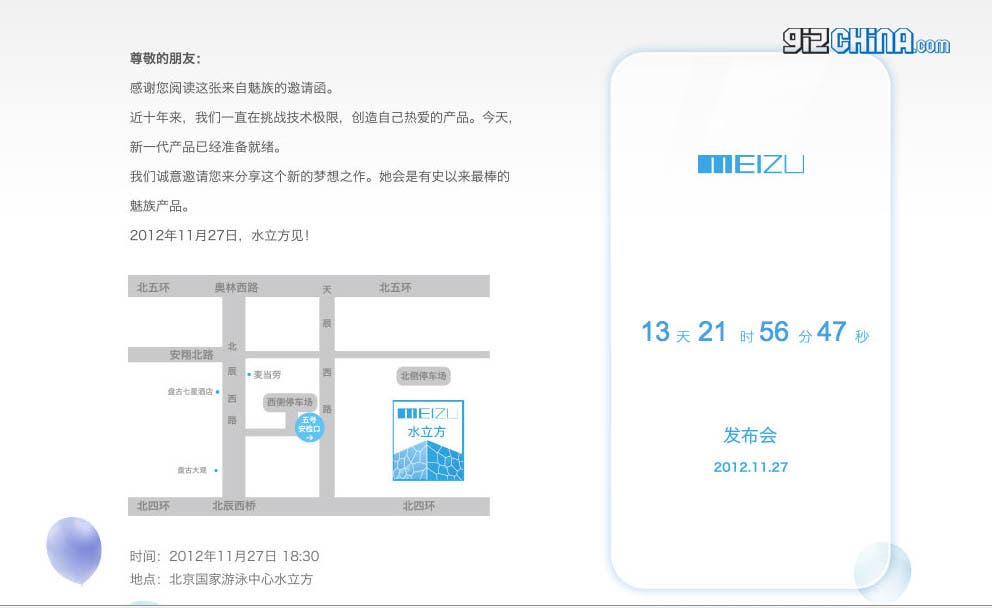 While the MX2 will be officially shown off on the 27th we expect the phone to go on sale on 1st January just as the MX and the M9 did before. Prices are expected to be 2999 Yuan for the quad-core phone and its likely that we will see a drop in price for the current Meizu Mx during the launch too.

Unlike the majority of manufacturers who keep their next-gen phone specs a secret Meizu have confirmed almost everything about their new phone!

I’m sure Meizu haven’t given everything away and I can’t wait to see what surprises the MX2 has in store for us!

Source CNbeta and Meizume and thanks to Igor!

Previous 5 inch Beidou Chi or DaKele? Which would you choose?