The GooPhone i5 has been one of the most highly anticipated Chinese phone launches in the past few months. We’ll it has taken longer than hoped, but the i5 is finally on sale! Keep reading for a in-depth review.

Not all clones are created equal

Different people look at clone phones in a different light. Some of you may think clones are nothing more than a way to scam customers out of money, while others (like me) see them as feats of engineering and technical achievement! 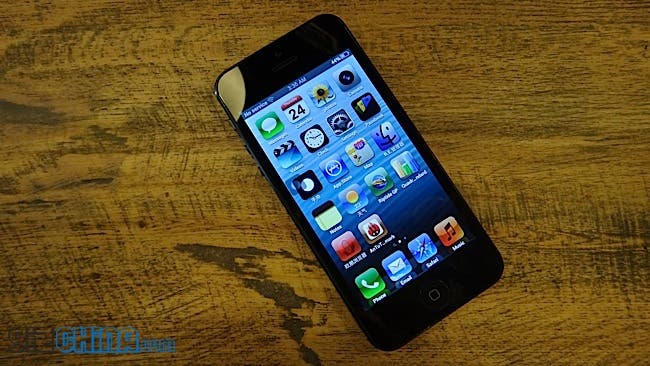 There are of course some phone makers out there who do try to fool unsuspecting buyers, but if a manufacturer goes out of their way to brand a clone as their own, then we can safely say they don’t want to con us. 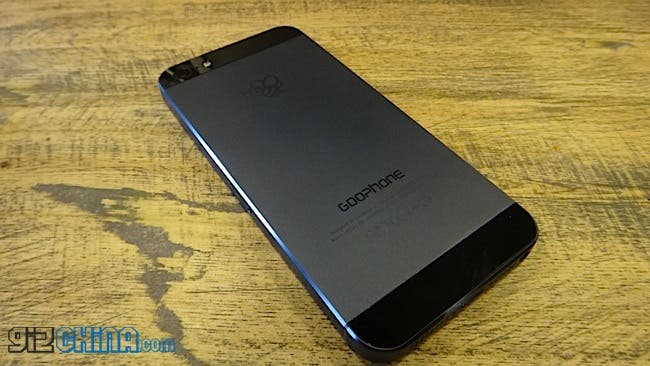 The GooPhone i5 is a perfect example of this. GooPhone have gone to great lengths to perfect the exterior design within such accurate tolerances that it would be extremely difficult to tell the real iPhone 5 from the i5 if not for the obvious GooPhone logos.

To me this says GooPhone are so proud of the quality of their phone that they don’t want anyone but themselves taking the credit for their masterpiece!

GooPhone i5 design and fit – just pick up an iPhone 5 and you will know! 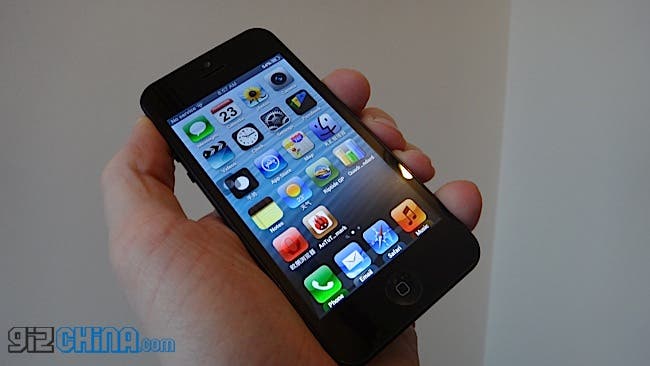 I’ve seen plenty of iPhone 5 clones but each and everyone just felt (and functioned) like a cheap knock-off, and not cheap in the good sense! The GooPhone i5 however, oozes quality! 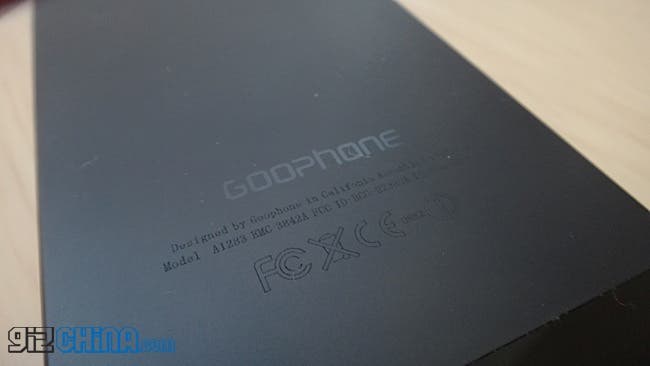 Weighing in at 108g (3.75 ounces) the i5 is actually a touch lighter than the real iPhone 5 which hits the scales at 112g (3.95 ounces)but this doesn’t seem to reflect the choice of quality materials. 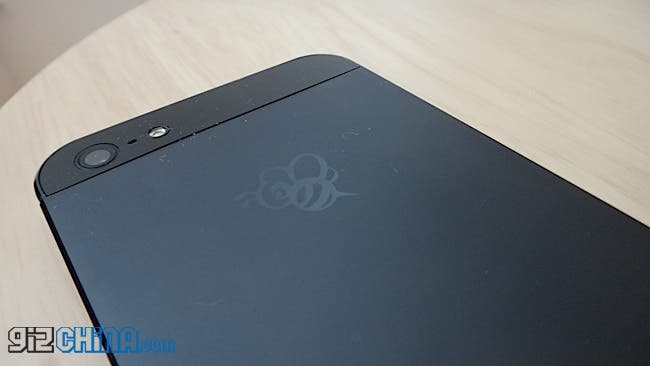 The main body is manufactured of aluminium which has been laser etched with the Goophone logos, and has had thin slivers of black plastic attached around the 8 mega-pixel camera and LED, and bottom of the phone. 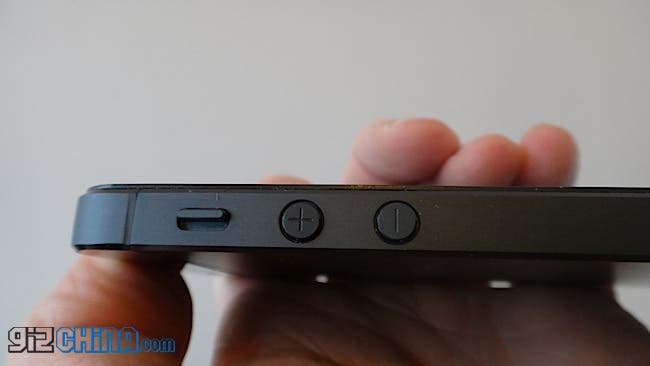 Looking from the front, the left side of the phone features the mute switch and volume controls. Of the exterior construction the only piece which let’s the i5 down is the mute switch. If feels very cheap in use compared the rest of the phone, but luckily I don’t use it all that often. 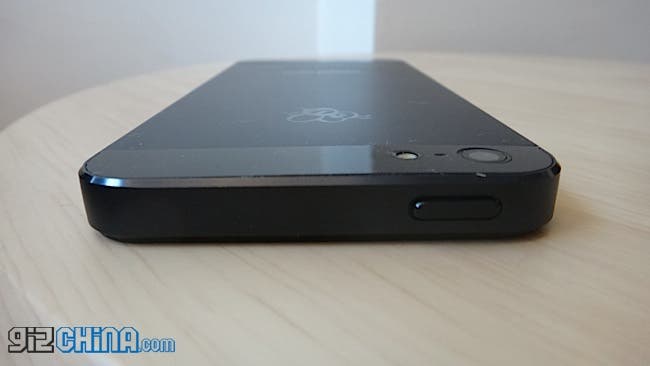 The power/lockscreen button is located on the top edge.

A Sim tray for a micro SIM (the iPhone 5 uses a nano SIM) is found along the right. 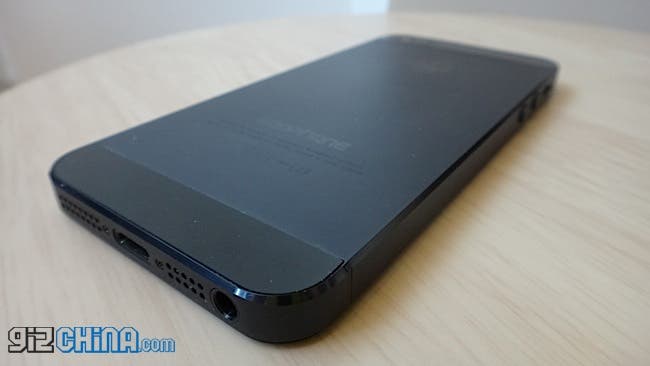 The the bottom is punctured with a 3.5mm headphone jack, speakers, and cloned version of the Apple Lightning connector for charging and transferring files!

Another camera is located top center of the phone above the speaker and display, and the trademark Apple home button sits below. There are no capitative Android navigation buttons on the GooPhone, and there aren’t any on screen ones either, but more on this later.

Display – Good, but not the best on bright days.

The display on the GooPhone is the same size 4-inch panel used in the iPhone 5, but with a lower resolution of 960 x 540. I personally did find this a problem, but there is a marginal difference between the GooPhone’s display and the real iPhone’s, but far from being a deal breaker. 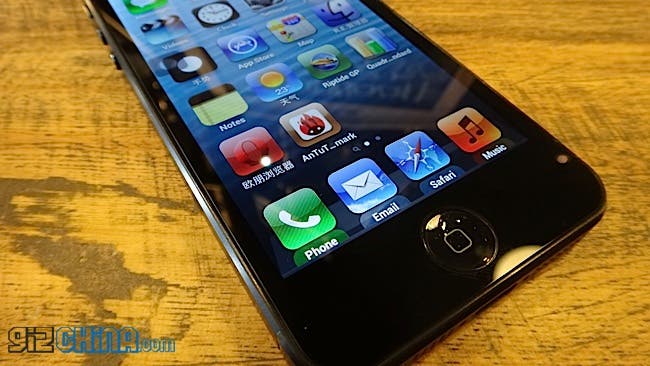 Screen brightness is a little on the dim side for my liking. Use indoors is not a problem and the display has great viewing angles, but outdoors things became a bit more challenging especially in direct sunlight.

While the screen is on the small side when compared to other Android phones, the i5 doesn’t have to give any screen real-estate up for navigation buttons thanks to the authentic iOS 6 skin.

But while viewing is good, the responsiveness is sometimes a little off, and you might have to tap away at the same small on-screen option until the phone decides to register.

Let’s just get one thing out of the way here. If you are an Android person, and don’t like iOS, then you will dislike the i5! 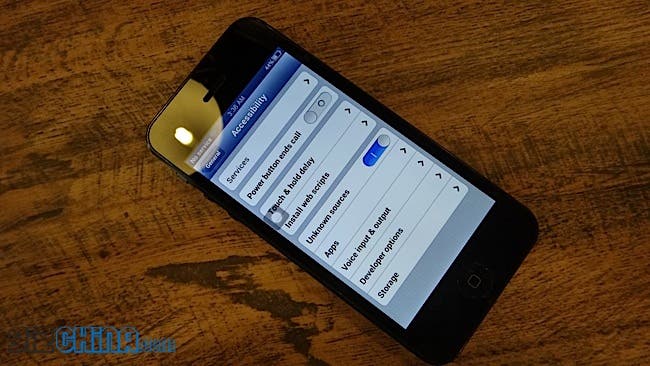 GooPhone have stripped almost everything that remotely resembles Android 4.0 ICS on this phone, which is perfect for those who want to immerse themselves in to an Apple iOS 6 style UI. 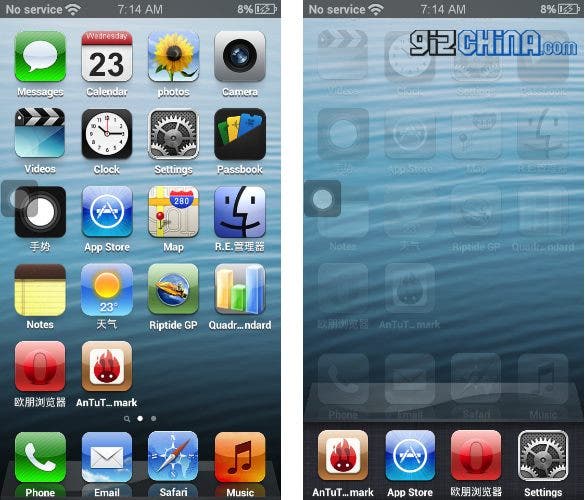 Folders are available, apps can be moved around or uninstalled by pressing them until they shake. There is multitasking and apps running in the background can be seen with a double press of the home button! Even Siri makes an appearance, however she only speaks Chinese. 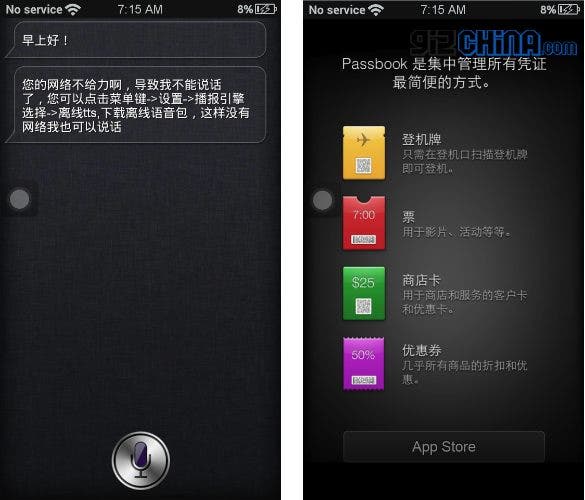 FYI: Taking screenshots on the GooPhone i5 is the same as the iPhone. Press the power button and home button at the same time.

The implementation of the i5’s iOS 6 skin is so detailed that GooPhone have included features just for shear authenticity rather than use! Pressing the settings icon will take you too a menu filled with iPhone and Apple features and it takes a bit of poking around to see what works and whats there for the looks. 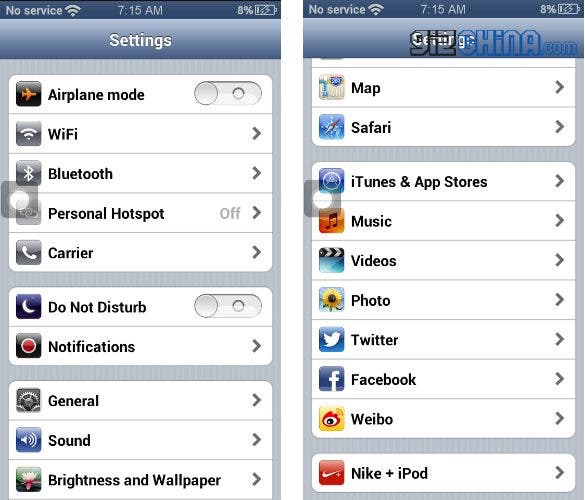 Nike Plus obviously does nothing, the iTunes & App stores menu takes you to an inactive “log on” button, Facebook, Twitter and Weibo have menus which appear to work, but the install buttons don’t work.

This continues on to the springboard where icons such as Maps, Reminders, Stocks, Newsstand, iTunes, and Game Center are just dummy apps with no purpose other than too look the part.

Strangely though, Passbook does open and even has a working button which takes you to the built in “App Store”, but I’m not sure what other use it functions as.

Speaking of the App Store, the GooPhone i5 does not come with the official Google Play application store but instead a Chinese market. As you would expect searching in English isn’t of much use, but with a bit of browsing you can find a few apps worth downloading. Below is a short video showing you how to use the Chinese app market.

Installing apps manually from your PC is as simple as it is on any Android device, once you know where the menus are hidden in the iOS interface.

Manually Installing Apps on the GooPhone i5

Note: If you unplug the i5 without turning off USB storage you might find that the internal memory is automatically unmounted. You will need to remount it manually in under Settings > General > Accessibility.

Entertainment – Good, but not for hardcore gamers.

Gaming: I installed Riptide GP to the GooPhone i5 as I find it’s fast pace and liquid graphics a good test for most Android phones. As you can see in the video below the GooPhone handled the game well, but there is some notable slow down when framerates pick up. I feel the i5 would struggle with anything more graphically demanding.

Video: I uploaded the same 1080p Die Hard Trailer on the i5 as I tested on the more powerful Newman N2 and the Goophone and it ran just fine, which comes as no real surprise. I also tested out the 1080 .mov file that I recorded on a Sony DSC-TX10, but found the video to play extremely choppy.

Performance – On par with other dual-core MT6577 phones

Unfortunately the i5 hasn’t been blessed with a quad-core processor and instead makes do with a dual-core MT6577 CPU running at 1Ghz and 1GB RAM.

For a phone running stock Android this would be enough, but with the heavy iOS layers on the GooPhone it can sometimes feel a little sluggish when viewing photos in the gallery or moving through the spring board loaded with apps.

The lag isn’t always present though, as the i5 manages to capture and save photos at an impressive rate!

While we tested the GooPhone we ran a number of benchmark tests. 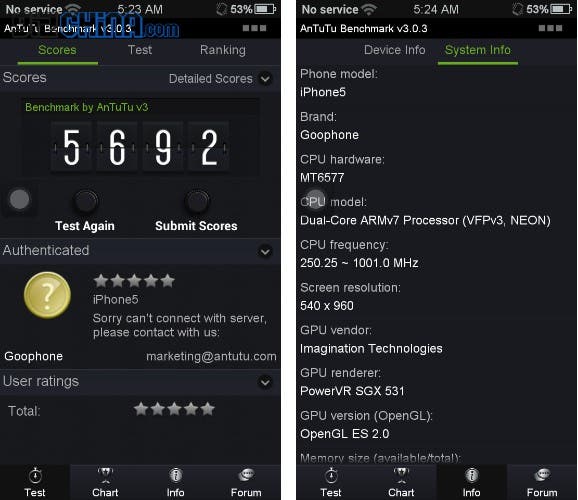 Antutu: On Antutu the GooPhone scored a very low benchmark of 5692 which is about right for a MT6577 dual-core phone with 1GB RAM. Quadrant: The i5 managed a score of 2417 in quadrant, which is fine but hardly earth shattering.

When I’m testing a new device the first app I head for is the camera. As you are probably already aware the camera App on the GooPhone i5 is a complete clone of the iPhone 5’s and features similar options such as HDR, Gridlines and Panorama.

Taking photos is fast on the i5 as is the focus, and it’s easy to snap off a few photos in succession without the phone bogging down. In use, the i5 actually seemed a lot easier to get a good photo when compared to the Newman N2 as the focus seemed to be locking on faster, however the end results confirmed this not to be the case!

The 8 mega-pixel rear camera on the i5 should, in theory, deliver great quality photos, but that isn’t the case. I found that photos appeared to be in focus when lined up, but were actually captured out of focus.

This is most notable when taking photos of landscapes with the focus of the photo being further than a few feet away.

Close up photos, on the other hand run out to be good, but below par when compared to phones with similar specs.

Low light photos aren’t much better, and the LED flash although very bright is timed to go off at the wrong point when the phone is capturing an image. This results in very little difference between photos taken with the flash and those without.

Video Capture: with a swipe of a switch you can begin recording video. When recording the i5 will be in a fixed focus mode and video is only 640 x 480 res. Pretty disappointing as phones of a simlilar price offer 720 and even 1080 video capture with auto-focus. You can download the video sample I took with the GooPhone i5 here.

Conclusion – Great for the iPhone fan on a budget, but….

If you have your heart set on an iPhone 5, but can’t afford the genuine model then the GooPhone i5 is the device for you. You will get a similar user experience, almost all the same features and you will save yourself a ton of cash. 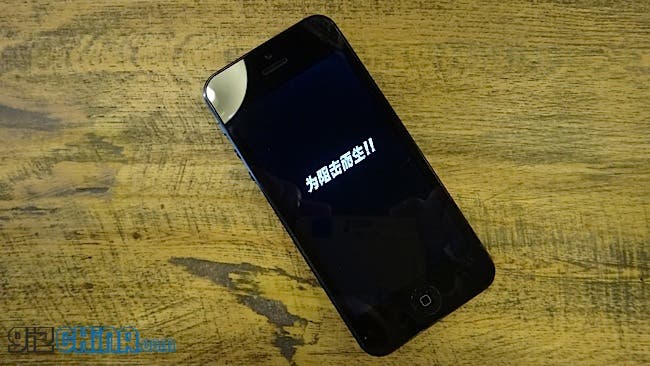 I’m really impressed with the quality of the GooPhone and pretty stunned by the amount of effort which GooPhone have spent developing the phone and making it the closest you can get to an iPhone 5 without buying an iPhone.

If you are an Android phone lover then you will want to avoid the i5 as it offers non of the benefits of an Android phone, complete with a similar locked in iOS experience.

Personally I would spend my money elsewhere (such as the Newman N2). I’m not impressed with the camera, and the mix of Android and iOS has really stunted the usability of the phone, so much so that I would not recommend this phone to those looking for their first smartphone as it requires a certain amount of fiddling to get to grips with.

Thanks to Android-Sale for supplying our review phone. If you do fancy buying a GooPhone i5 you can order from them online here.

Have you guys had a chance to test the GooPhone i5? What are your opinions of it?

Previous The Pantech Vega IM-A860 should be released this month