Both the Newman N2 and Xiaomi M2 are budget phones which have redefined what we should expect from $300 smartphones. Both pack quad-core processors, great screens and fantastic camera’s. But which is better the Xiaomi M2 or the Newman N2.

Both the Newman N2 and Xiaomi M2 boast equally impressive hardware. I don’t just mean impressive for the price, but impressive full stop! If you were to look at a phone with similar specs from either HTC or Samsung you could expect to pay double what these Chinese phones cost! 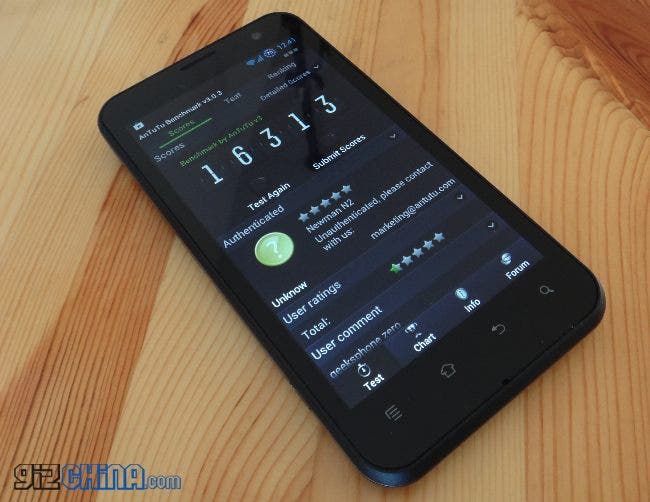 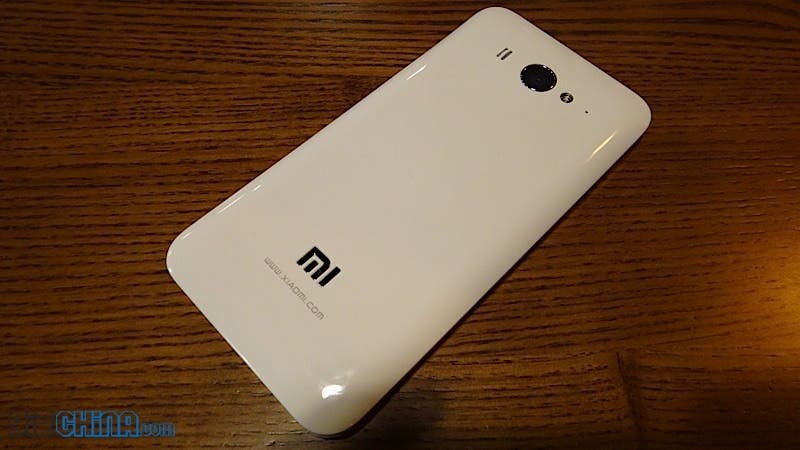 The M2 also boasts a powerful quad-core CPU, but this time it’s a 1.5Ghz Snapdragon S4 unit with 2GB RAM. The display is smaller at 4.2-inch, but the cameras are equally impressive with both units capable of capturing 1080 video. The Xiaomi M2 has a 2 mega-pixel front camera, while the rear is an 8 mega-pixel sensor with an F/2.0 aperture.

Did I choose the best phone?

While I love to have the fastest processors and best quality screens on my smartphones, the one feature which veto’s the rest is the performance of the rear camera. With this in mind many readers wondered why I decided to buy the Xiaomi M2 as my personal phone, when the Newman N2 is cheaper and has a 13 mega-pixel camera? It got me wondering too! Had I made the wrong decision?

Lucky I still have the Newman N2 on my desk from last months review when the N2’s rear camera really did blow me away! So with both phones at my disposal I set out to testing which handset has the better rear camera.

Note: I did start the shoot-out on Thursday and took a number of photos at a local market, however after an 2 hours sitting in traffic and an hour of taking photos I got back to my car and discovered I had the Xiaomi set in 6 mega-pixel capture!!!! So I started again today.

All the photos you see here were taken as anyone of you would take them, i.e. on the spur of the moment with no setting up or adjusting of the light. Both phones were left on auto, I’m sure adjusting the various manual setting you could produce better looking photos, but I wanted to keep things fair. 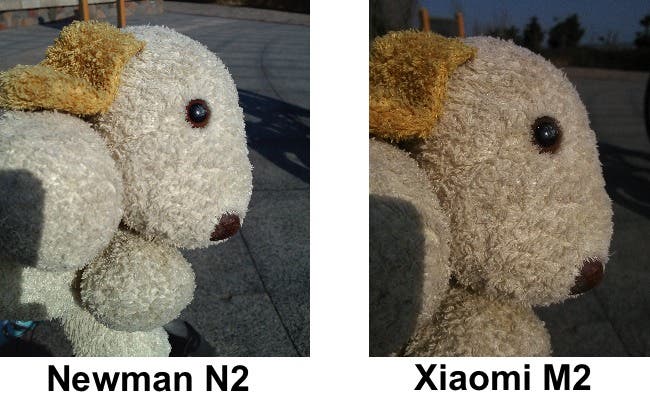 The photos shown in the galleries below have been reduced so as not to slow page loading times, but I will post links where you can download the full size images at the end of the shoot-out.

It just so happened that the fog and pollution of the past few days had passed, and so with a bright blue sky and the sun shining I headed to a local park situated by the sea for some N2 on M2 action.

With the sun in full force it really gave me a good opportunity to test just how well the screens on both phones could be viewed.

As mentioned in our Newman N2 review here, the N2’s screen was difficult to view even on the brightest setting. This became a problem when capturing photos as we were unsure when photos were in focus or not. The Xiaomi on the other hand was much easier to see with the brightness set to just 3/4. That and the fact the M2 makes and audible ‘beep’ when in focus made taking photos on the Xiaomi much easier.

So how about the results? Which phone produced the better photos on a bright sunlit day? 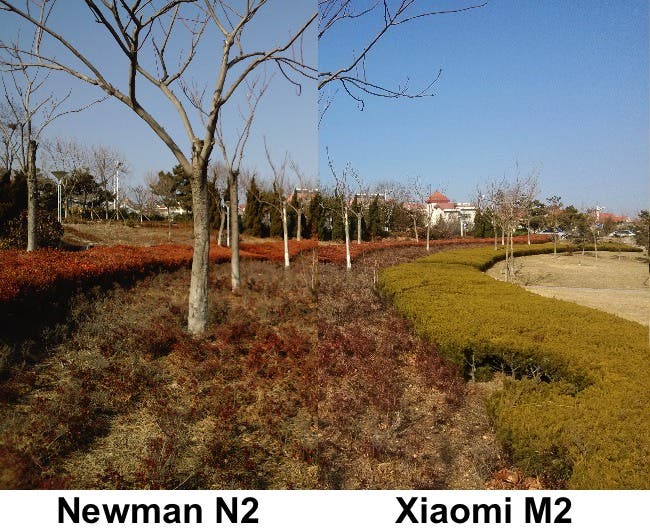 Personally I prefer the images produced by the Xiaomi. Not only was it easier to line up a photo on the M2, but the captured image seems to be much sharper and offer brighter colours.

The N2 produces excellent photos too, but they seem to be less sharp and the colours look a little faded and not as vibrant. The Newman’s colours seemed to be a little more natural, but I personally prefer the look of the M2’s.

Winner: Xiaomi M2 (but it really is down to personal opinion)

Next stop on our photo shootout was the local supermarket. This gave me ample opportunity to snap some close up photos bright fruit and vegetables. Not only was this a great test for both phones, but it was also a nice treat for the staff must have thought I was the strangest “Laowai” they had ever seen! 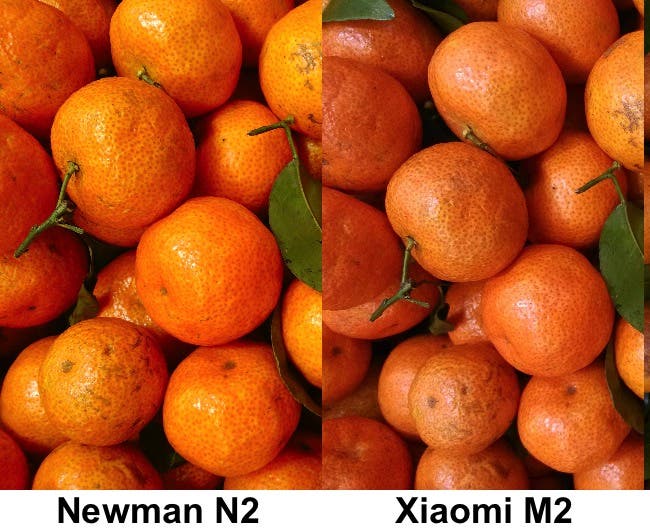 So how did the phone compare in these indoor conditions?

In my opinion the Newman N2 performed much better when used close up and the 13 mega-pixel sensor performed a great job of picking out the finer details. Colours were less vibrant on some of the Newman’s photos, but they also appeared closer the real life. The M2 produced brighter images but without the finer details when zoomed in.

Again, this is down to personal preference, and you might prefer the more natural and detailed image caught by the Newman N2, or the more attractive, but less accurate colours from the M2.

The final test was a night time shoot. This first lot of photos shows what was captured using auto settings once more, but with the flash turned off. As you can see the Newman really can’t compete with the Xiaomi’s low-light performance.

With the flash on both phones are capable of capturing useable photos, however the Xiaomi’s flash seems more powerful and offers a more natural light making the image much better looking when viewed on a larger screen.

As for usability the Xiaomi M2 scores additional points as we are given a short preview of the captured image before it is sent to the gallery. The Newman N2 doesn’t do this so and it can be a little frustrating to have to keep going in to the gallery to see if the photo is a keeper.

Both phones taking outstanding photos in most conditions, but both have their strengths and weaknesses. The Newman N2 is the runaway leader for capturing detailed closeups! But when the light disappears the Xiaomi M2 is in another league.

As for photos taken when the conditions are good, both produce great photos and it really comes down to which you prefer (and I prefer the Xiaomi).

Overall I’m really impressed with both phones. They both offer great value for money, awesome performance and produce great photos. So am I still happy with opting to buy the Xiaomi M2? Most certainly, but had I bought an Newman I certainly wouldn’t feel disappointed!

If you want to see the full resolution images you can download them from here!

Next HTC M7 shows up on stage looks nothing like the leaks!