We can finally put those Xiaomi Mi2A rumours to rest as the phone has officially appeared at China’s Communications Ministry and has received it’s network license.

Over the past couple of weeks we have heard a number of rumours concerning the next Xiaomi phone, with the overall opinion being the next phone will be a low-cost budget device to replace the ageing Xiaomi M1s. They appear to have been correct too, as a new Xiaomi phone has just been spotted on the Tenaa website (imagine the FCC for China) and has received the official go ahead to enter the market. 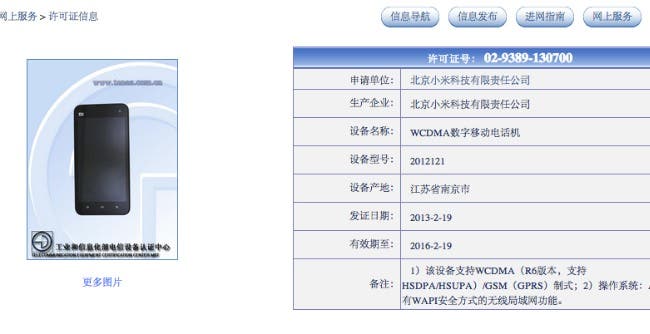 As we can see from the photos of the new Xiaomi phone, the general look is very similar to the current flagship Xiaomi M2. The front appears to have a similar size 4.3-inch display judging by the large bezels, and there are capacitive navigation buttons on the chin. It’s only on the rear of the Xiaomi Mi2A we see some real differences. The camera area is square on the leaked Xiaomi Mi2A photos and the external speaker has been moved from the rear and placed on the left side of the phone.

We are still waiting on confirmation for the Xiaomi Mi2A specification, but if the rumours are true we should see the regular Xiaomi Mi2a launch with a dual-core Qualcomm MSM8930 1.7Ghz CPU, Ardreno 305 GPU and 1GB RAM, while a cheaper “Youth Version” is expected to go on sale with slight downgrades in spec.