We’ve been waiting a good long while to finally see Gionee’s carbon bodied flagship Android phone, and here it is at the Mobile World Congress. Keep reading for more photos and details.

Oringally named the GN818T (perhaps this is the domestic name) the carbon Gionee phone at MWC is tagged as the equally uninspiring CBT1805, not the name we would have chosen but there you go.

The lightweight body is made of a mixture of carbon fibre and Kevlar (yes, the same stuff they use in bullet proof vests), which will hopefully ensure a robust and rugged exterior. Measuring in at 134.3 x 68.9 x 7.2mm the CBT1805 isn’t the thinnest phone in the world, but those who have had hands on time say it’s comfortable in the palm and feels as well made as the Oppo Find 5 and ultra thin Vivo X1. 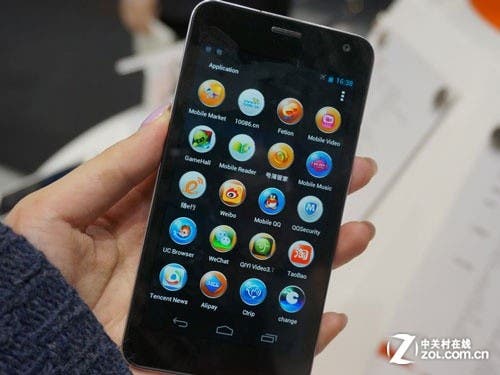 On to the hardware, the Gionee CBT1805 boasts a 4.65-inch display with on-screen controls on the front with a 8 mega-pixel rear camera breaking up the carbon expanse on the rear. Sandwiched between the glass and carbon is a Mediatek MT6589 quad-core processor running at 1.2Ghz, and (unfortunately) 1GB RAM and 4GB of built-in memory. The battery size is also a little disappointing at just 1800mAh.

Judging by the branding on this demo model the Gionee CBT1805 will be headed to China Mobile’s WCDMA 3G network sometime this year.

Previous JiaYu G4 to launch by the end of March!

Next UMi X2 available in India from March 15!