Usually when we get news of leaked specs for a new phone we normally find the details to follow a tried and tested route. For example the norm for most new Chinese phones is a quad-core CPU, 2GB RAM and a 5-inch 1080 phone, great hardware but hardly surprising. Then we look at the alleged hardware for the ZTE U9810 and we are shocked, surprised and a little bewildered!

The first point which jumps out support for 4G LTE, in fact the ZTE U9810 will run on 5 different band frequencies including TD-LTE, FDD-LTE, TD-SCDMA, WCDMA and GSM!

The next piece of the hardware puzzle is the amount of RAM, 4GB RAM! That’s the same amount as the computer I’m typing this on has! 4GB RAM is huge for any phone, and would happily keep a 1080HD phone chugging along all day, but strangely the ZTE U9810 will be a 5-inch 720 phone! 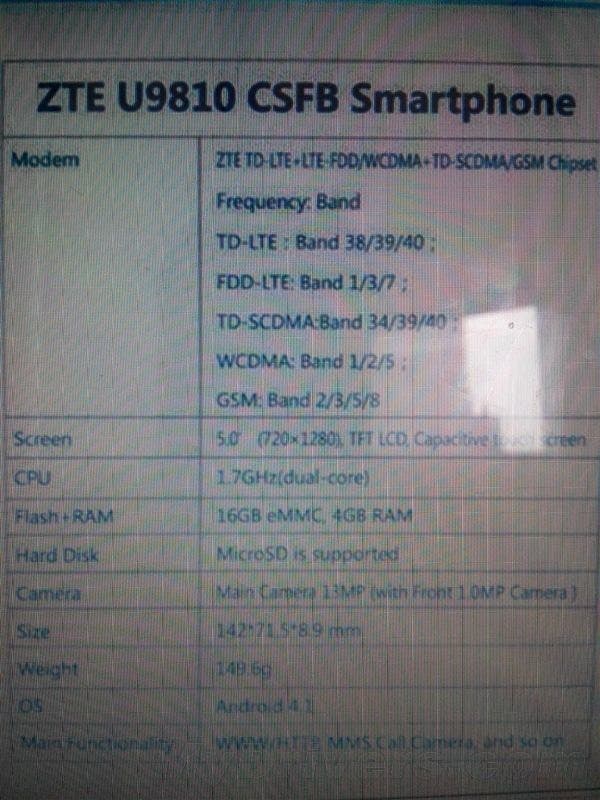 Coupled with the huge amounts of RAM is a dual-core 1.7Ghz CPU, we have no idea which CPU the phone is using, perhaps it could an Intel chip such as the Clover Trail unit found in the Lenovo K900?

The rest of the hardware is run-of-the-mill stuff with Android 4.1 Jelly Bean running the show, 16GB memory on storage duty, a 1 mega-pixel front cam and 13 mega-pixel sensor around the back.

No details on pricing, release date or what the phone will look like, but we’ll keep you posted!