Were as upset as you guys are about the JiaYu G4 delay, and now you’ll be as confused as we are when you see the amazing benchmarks the quad-core JiaYu G3 is scoring! Why buy a G4?

If you are currently waiting to be the youth version of the JiaYu G4 you might want to quit waiting until May where it was rescheduled to launch and take a serious look at the updated JiaYu G3!

The new JiaYu G3, available from the middle of this month, will boast the same 1.2Ghz quad-core MT6589 CPU as the JiaYu G4, what’s more it has 1GB RAM, a 720HD display, Android 4.2 Jelly Bean and large 2750mAh battery! So technically the Youth G4 and quad-core G3 are very similar, so how about Antutu benchmarks? 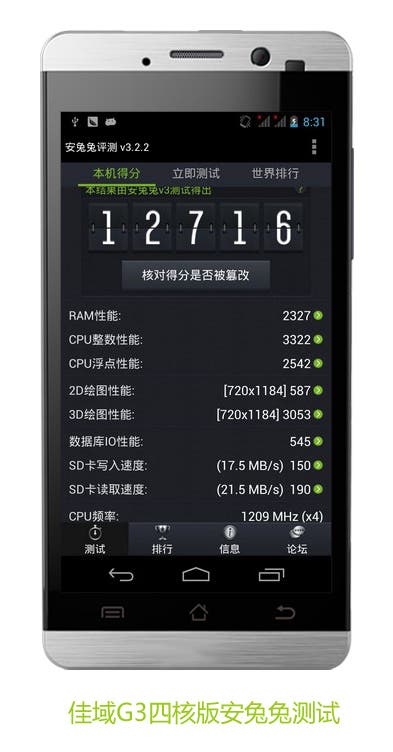 A new thread on the official JiaYu forum answers that for us with screenshots of the new phone showing is score 12716 on version 3.2.2 of Antutu! Again practically identical to the youth version of the G4!

JiaYu haven’t commented on pricing yet, but we expect the MT6589 version of the JiaYu G3 to retail at 999 Yuan ($160) which will get you all of the above plus a 4.5-inch display, alloy body and 8 mega-pixel rear camera!

So which will you buy? Updated JiaYu G3 or Youth version of the JiaYu G4?

Next JiaYu G4 to get OTG function