I’d been looking for an upgrade from the UMI X1 I bought in November last year, and had shortlisted a few available and upcoming phones, namely the Jiayu G4, UMI X2, Zopo ZP980, iOcean X7 and maybe 1-2 more which I might have missed here. I decided to settle on the Jiayu G4, since apparently the G3 was the best built phone in its generation of Chinese phones last year, and expected the G4 to continue the legacy. I was determined to wait until the G4 was made available, and in the meantime I had to sell the UMI X1 because there were talks of UMI releasing the X1 and X2 in my country, which would mean I’d get much less if I sold the phone after they got launched here.

However with the start of a part-time job I began to look at more expensive options. With my extra income I considered the Meizu MX2, Oppo Find 5 and Galaxy S4. A few months later I am the happy owner of an Oppo Find 5, which I chose over Meizu and even the mighty Samsung Galaxy S4!

When I decided on the Find 5 I spoke to Oppo about who the official reseller in India was, their answer was there isn’t one, but they did offer me a generous discount after mentioning I would be reviewing the phone. Unfortunately I couldn’t take Oppo up on their offer due to payment restrictions in India and ended up buying the phone through Aliexpress, a process which I am happy to report went smoothly with Find 5 arriving at my home in only a few days! 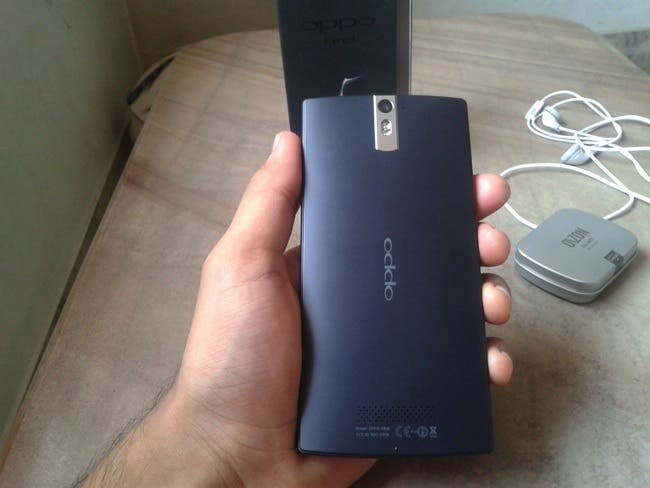 Superb build, feels very solid in the hand. Since there are no moving/removable parts (even the battery is non-removable), the phone is extremely sturdy and there are no creaks whatsoever. The ‘feel’ of having this phone in hand will probably remind you of the Lumia 920 if you’ve ever played with one. 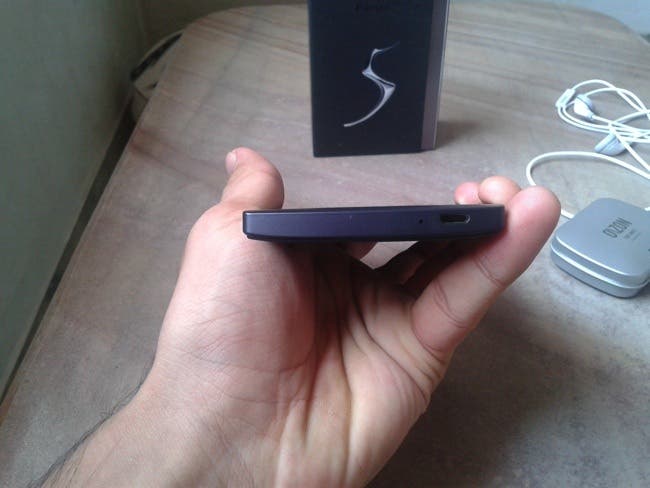 The phone isn’t meant to be particularly thin at 8.9mm, but the curved back makes it feel thinner than it actually is, since the edges are thinner than the ‘meat’ in the center. The phone isn’t a lightweight device either, but this adds to the overall sturdy feel.  Although I found the 5-inch phone to be comfortable, people with smaller hands might want to wait for the rumoured Find 5 mini to launch. In a nutshell the design is simply amazing, and is bound to attract a lot of attention. I feel the Find 5 and the Meizu MX2 are the best looking phones currently available! 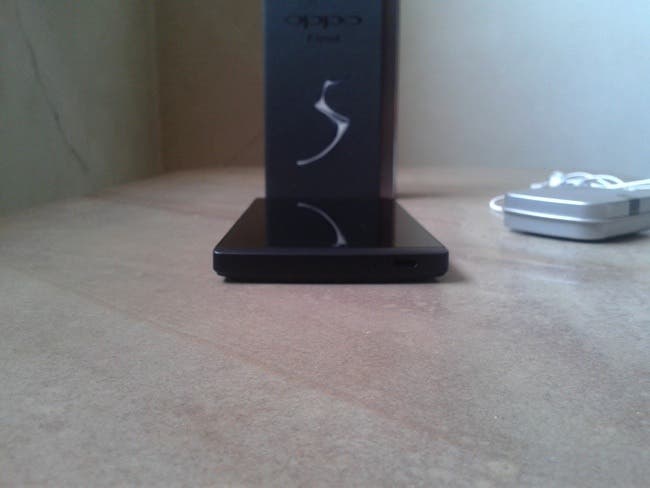 The physical button placement will take some getting used to it, since OPPO decided it would be better to have the power/wake button on the left instead of on the right as on most mainstream devices.

Everything works fine, no problem here. The phone uses a micro SIM card, so anyone who’s looking to buy the Find 5 is advised to get one from their carrier. I however, was impatient and decided to do some home-hackery to cut the normal SIM into a micro SIM and thankfully, it worked. Haven’t yet tried pairing it up with my headset but I believe there shouldn’t be a problem. The phone comes with NFC and 2 NFC tags. +1 to OPPO for this.

Battery life is about average with the stock Oppo ROM, but switching to the Cyanogenmod ROM drastically improves this. On the stock ROM you can expect the phone to give you one whole day of use where as, on CM10.1  you can expect 1.5-2x times of use plus you can enjoy more support and stability from the CM ROM too!

Simply amazing. However, I’d like to point out that I don’t really play games on my phone, and since I’m coming from a rather low-end device (UMI X1, MT6577), the difference I feel might be a little more than what others might feel. Taking nothing away from the phone, it feels super fast and slick. 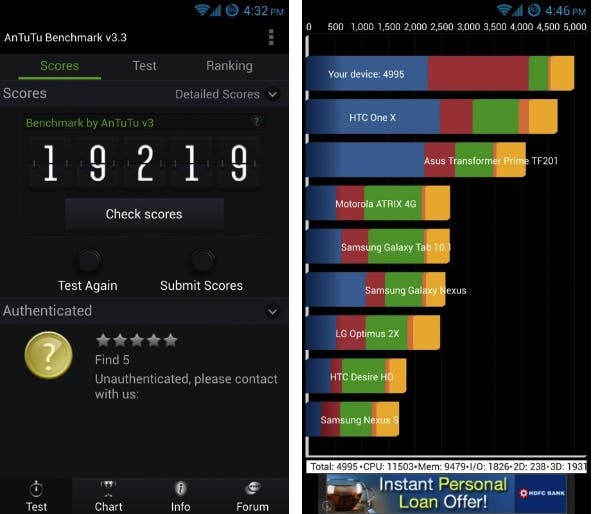 Menus load in no time, transitions from screen to screen are smooth. The phone uses a quad core 1.5 GHz Krait (Snapdragon APQ8064) processor, same as that of the Nexus 4.

The phone comes with a 13MP Sony Exmor RS sensor, which is capable of HDR video. Pictures from the camera in daylight are an absolute treat, however the phone does leave a little to be desired when it comes to low-light photography. This, however, is a software issue which can be solved by upgrades, so you can hope to see better pictures from the phone in the future.

The earpiece sounds a little low in volume on the CM10.1 ROM (known bug), but with the stock ROM it works absolutely fine. The loudspeaker sits at the bottom on the backside, with machine grilled holes. The volume from the speaker is the loudest I’ve heard on a smartphone, and the quality of the sound is very nice, no distortion whatsoever. However, I don’t really use the loudspeaker, I prefer listening to music on the Dirac HD earphones, the quality on those surpasses that on my iPod and a CC1600 based player by miles, although there is a little leakage on the earphones since they’re open type.

I’d gone through a few forums before I bought the phone, and apparently there were a few bugs in the official firmware. However, OPPO are very active with firmware updates and push out a new update every two weeks or so, so users can expect the issues to be ironed out. My first Android was the LG Optimus One, and since the phone I’ve only been using AOSP/CM based ROMs. So, without wasting much time I was on to CM10.1 on the OPPO as well, and have been loving it ever since. 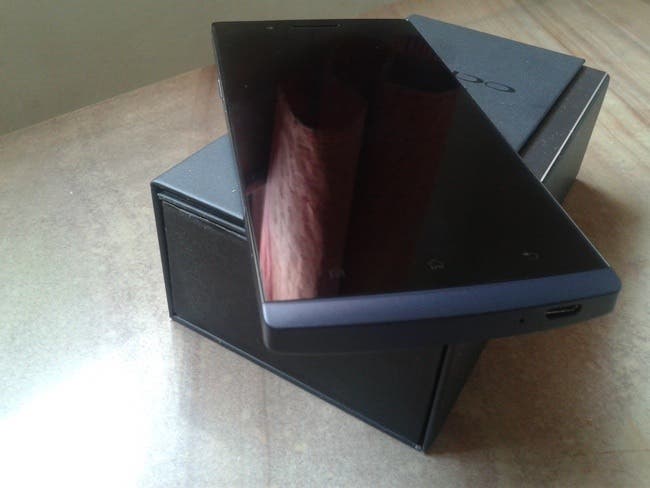 Dirac HD and Gorilla Glass 2 are some goodies on the phone which make it really worth the money. I paid $585 or 32,689INR for the phone, which is an OPPO Find 5 32GB Midnight Edition and for about 35,000INR you can buy the Xperia Z here, I suffered a bit thanks to the exchange rates prevalent at the moment. Even if the phones were priced equally, I’d probably have gone for the OPPO, since I wanted something new and unique, and Chinese!

[templatic_contentbox type=”author” title=”About the Author”] I’m a 20yr old engineering student from India, who’s very much interested in the latest technology from around the world, especially China. You can find me writing about various topics on my website. [/templatic_contentbox]

Next UPDATE! 3 alternatives to the Samsung Galaxy Note 3 you can buy now!