Chinese phone maker UMi are ready to launch the next phone and first phablet. We have UMi Cross official renders, specifications, pricing and launch details here!

Our sources have managed to get the official details for the UMi Cross ahead of the launch! The UMi Cross will be UMi’s first phablet device and second ever 1080 display handset, but rather than being just a larger version of the UMi X2, the Cross gets some very nice updates!

After seeing the leaked photos of the UMi Cross’s battery some days ago we know the new phone would be a huge device and the specs confirm it. The display is a 6.44-inch OGS panel with a resolution of 1920 x 1080 and a pixel density of 342PPI. 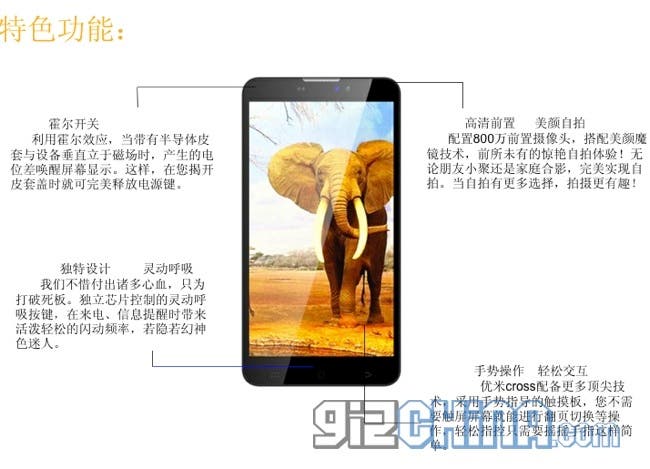 With such a large display UMi have shaved the bezels down to just 3.5mm to aid one-handed operation. The rest of the front is taken up with back lit navigation buttons, light sensors, and an 8 mega-pixel front camera. 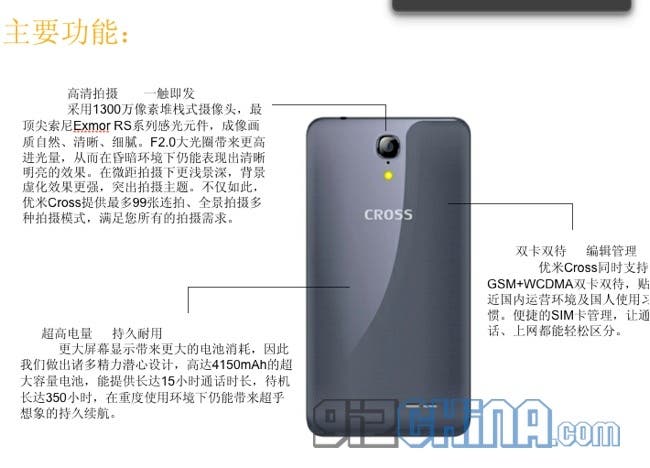 Turning the UMi Cross over and we are greeted with a simple ‘Cross’ logo, and single LED flash. The highlight though is the rear camera which is a 13 mega-pixel Sony Exmor RS item with an F2.0 Aperture!

Under the removable rear panel the Cross hides a large 4150mAh battery! According to UMi the cross has a standby time of 350hours! Removing the rear also give you access to the dual sim slots and micro SD card reader which will accept up to 64GB cards. 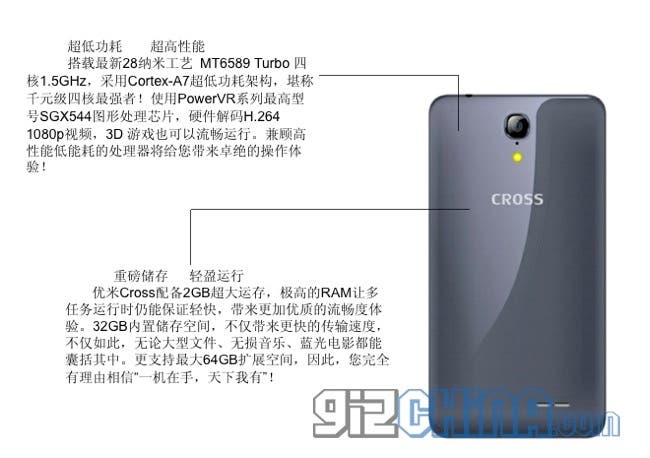 The internal hardware is similar to the top of the range UMi X2 meaning it is powered by a 1.5-ghz MT6589T processor, 2GB RAM, a PowerVR SGX544 GPU, and has 32GB of built-in memory. However there is also an NFC Chip, HIFI stereo amplifier, MHL support, OTG, and Bluetooth 4.0.

Update: We have been asked to remove the details about pricing and launch dates. Sorry guys!

Previous Is Oppo the World's most popular Android phone maker?

Next First real photo of the Meizu MX3?