An online poll asks which Android phone maker do you support, interestingly China’s Oppo is currently in the lead!

If you roll back the clock 18 months there would be a very good chance you had never heard of Chinese electronics maker Oppo. Of course if you were following GizChina back then you will have seen the original Oppo Finder and Find 3, plus there is also the chance you had seen their Bluray players, but the truth is Oppo were far from being mainstream.

For Oppo’s international carrier it all started at the end of 2012 with the launch of the Oppo Find 5, the worlds first quad-core phone with 5-inch 1080 display. It was an great achievement for the relative new comer, and the Find 5 still manages to be one of the best phones of 2013 to this day.

So with the Oppo Find 5 doing well and launching in a number of countries, a thriving forum and busy Facebook page, just how popular are Oppo? Well according to the current poll results over at Android Authority, Oppo are the most popular phone brand in the world! 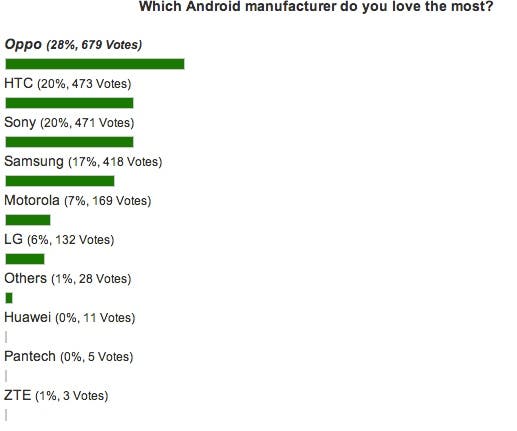 That’s not the most popular Chinese brand, but most popular Android phone maker! The poll currently stands at Oppo in the lead with 28% of all votes cast, HTC second with 20% followed closely by Sony, Samsung and the rest of the pack!

If you haven’t already voted head over to the poll and vote for your favourite!