We go hands on with the GooPhone i5C, a $120 Android powered iPhone 5C clone from China.

After years of speculation, rumours and waiting, Apple finally succumbed and launched a budget version of their iPhone. The iPhone 5C was launched as a replacement to the iPhone, packaged in a plastic body and with and a lower price tag.

The iPhone 5C has proven to be popular in the U.S, but here in China the pricing of the phone has made it undesirable and anyone wanting to enjoy the look and feel of the iPhone 5c has the option of buying one of the many clones such as the GooPhone i5C!

GooPhone were fast off the mark with the GooPhone i5c and managed to launch their knock-off not longer after the real phone was unveiled. 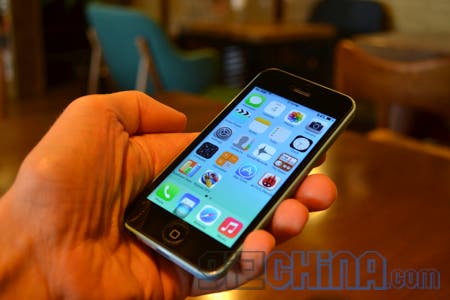 As usual they have managed to make a surprisingly accurate iPhone 5C clone (based on leaked components and images seen in China ahead of the launch of the phone) and have filled the plastic body with low-cost internals to keep the price low-enough for budget conscious shoppers.

Priced at $119.99 for international customers, the i5c is one of the most affordable Chinese phones on the market, but corners have been cut to keep pricing so competitive. 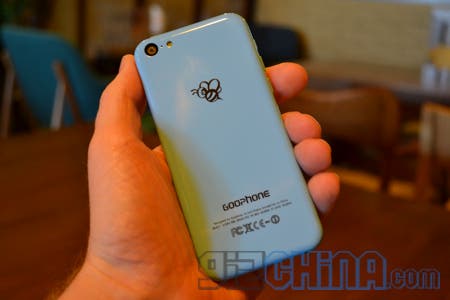 The display is a 4-inch 854 x 480 resolution model, the 1.2Ghz processor is a dual-core MT6572 with just 512mb RAM and the rear camera is just 5 mega-pixels. Compare this to a something like the Xiaomi Hongmi or JiaYu G2F and the GooPhone is lacking in every department!

On the other hand though the specs aren’t too power hungry which is just as well as the battery is only a 1500mAh unit!

GooPhone do make some of the best iPhone clones on the market, but cloning often leads to compromise, and so there is no dual-sim support in the i5c and no SD card slot (although we have been told there is one if you remove the screws and take off the rear shell). There are also no capacitive navigation buttons or notification LED.

If you have ever held a genuine iPhone 5C then you will already know just what the Goophone i5c is like. 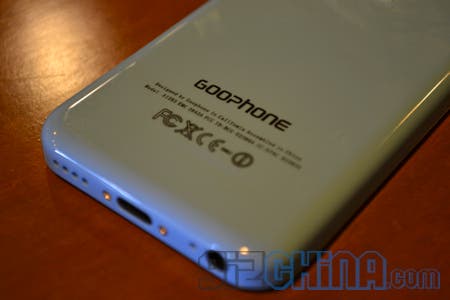 The body on our model is a blue version with GooPhone logos on the rear. The power lock-screen button is located at the top, volume controls on the left and speaker grill, 3.5mm headphone jack and fake lightning connector in the base.

A 4-inch screen takes up most of the front of the phone with a 1.3 mega-pixel front facing camera just above the receiver and a single physical ‘home’ button below.

Turning the phone over shows us the 5 mega-pixel rear camera with LED flash. Oh, and the SIM tray is located on the right.

The design and construction is very good and it feels really very nice in your hand, especially considering this is a very affordable phone (but not surprising as they copied all of Apple’s work!).

Other than the GooPhone logos on the rear the only deviation from the Apple design is the fact the display area protrudes higher from the plastic rear than it does on the rear iPhone 5c.

Behind the iPhone look and the iOS7 skin of the GooPhone i5C, the device is still an Android phone and it still runs Android 4.2 (a heavily modified version), but just as the body is compromised so is the OS and how it is used. 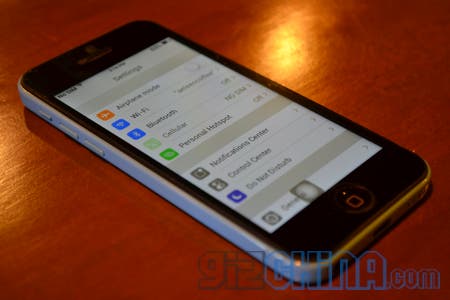 If you are an Android purist (you likely aren’t reading this review, but if you are) you will hate the iOS skin on the GooPhone i5C and will want to install a stock ROM or change the launcher. That said though, this version of the GooPhone ROM is better than previous versions and includes a file browser and the real Google Play store allowing you do download apps.

Like iOS there are plenty of preinstalled apps on the GooPhone i5C and each one uses the same icon as it’s iPhone equivalent. The Safari icon opens up the Android browser, App Store is actually Google Play, and other apps have been customised to look like iOS versions. 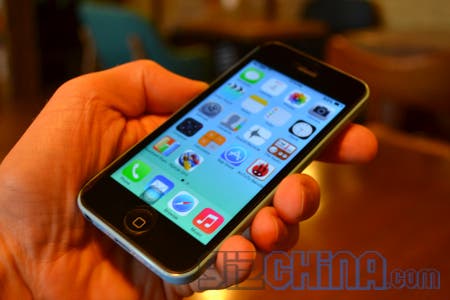 If you are a current iPhone or Android there is certainly one area which will eventually become tedious to you and that is the single physical home button. Android users are going to miss the typical 3 ‘menu’, ‘home’, ‘option’buttons, and everyone is going to dislike the fact the physical button is actually a ‘back’ button and not a ‘home’button. In use this means pressing the button numerous times to get back to the home screen, which is a little tiresome!

Other features of the OS are very similar to iOS. Apps can be moved around after a long press, be placed in folders and multi-tasking is handled the same with a double press of the button.

With a dual-core processor and 512mb RAM we didn’t really expect much from the GooPhone, but that small, low resolution display doesn’t require much grunt to run it and even Riptide GP2 ran smoothly and without slowing! In comparison the UMi Cross with 2GB RAM, 1.5Ghz quad-core chip and 1080 display could barely run the same game! 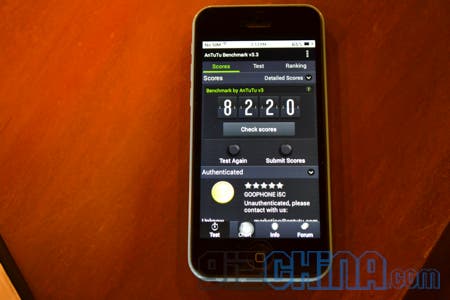 We don’t expect anyone buying the GooPhone i5C will be doing so for performance, but we still ran Antutu on the phone. Unsurprisingly the score was much lower than what we have been use to with a benchmark of only 8220.

As a phone for general use and simple gaming the dual-core chip offers perky performance and only gets bogged down when really challenged. 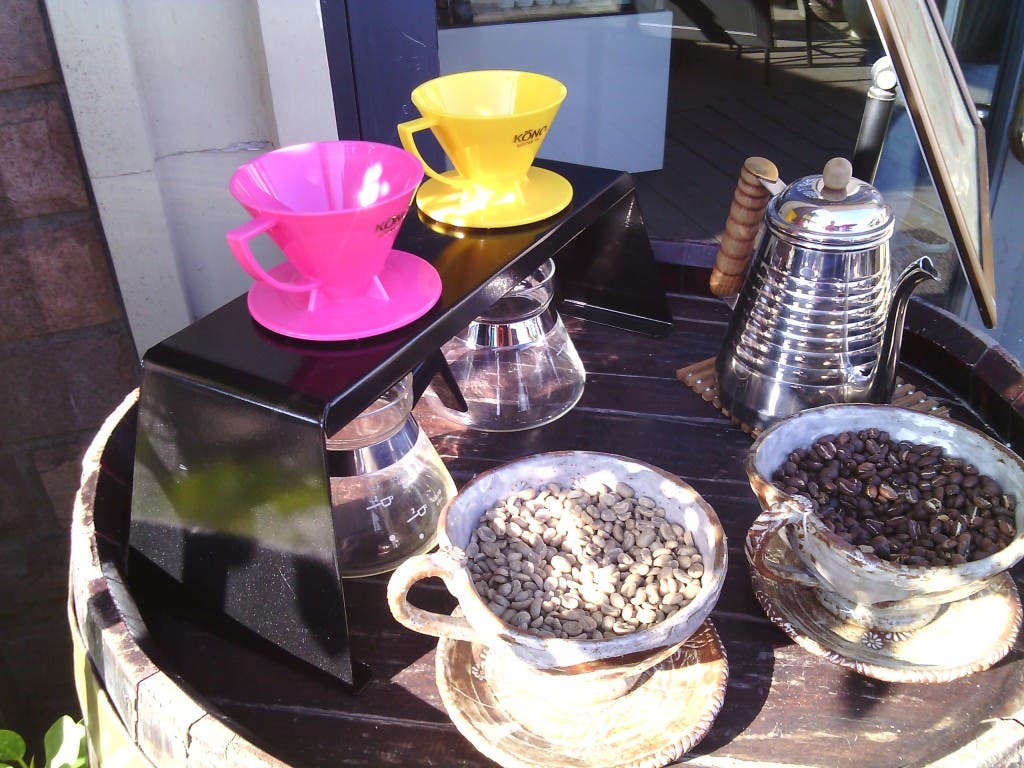 The 5 mega-pixel camera on the GooPhone i5C is like something from a phone launched early last year. Compared to the 8 mega-pixel sensor on other entry-level phones the performance is below par. Like many lower end Android smartphones you can get acceptable images if you take your time to set up the shot, just don’t rely on the GooPhone i5c capturing a spontaneous photo opportunity. 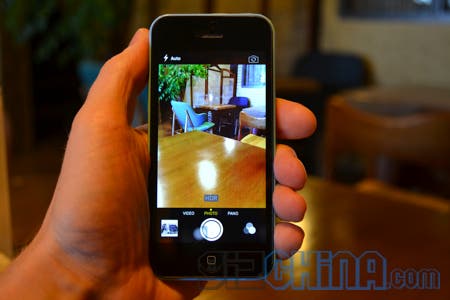 The UI is nice and functions in the same way as the iPhone 5c but taking photos is slow, the autofocus is limited. There was a point during the review that we thought the phone didn’t have auto-focus, but it is there.

It is really difficult to pin point who would appreciate the GooPhone i5C. Someone really wanting an iPhone would certainly appreciate the 1:1 look of the phone and the OS, but will likely become frustrated with it as time goes by. Seasoned Android phone users will not want to purchase the GooPhone as its the opposite of everything we look for! So who would want one? 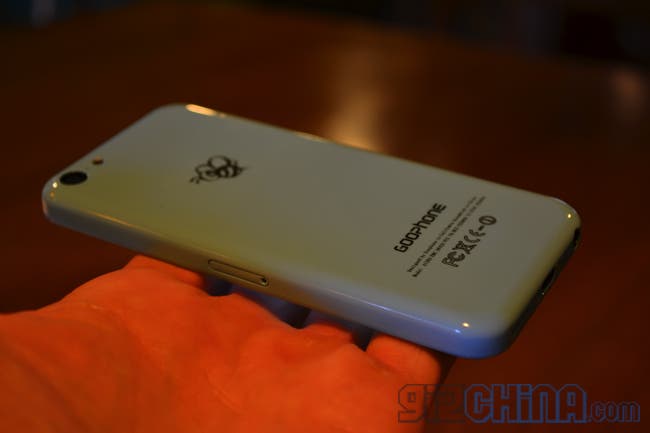 Parents looking to buy their children an affordable and stylish phone might want to give it a look, but in all honesty there are other phones out their for not much more which I would spend my money on.

The GooPhone i5C, in my opinion , is a missed opportunity. GooPhone could have taken all that is great with the iPhone 5C and Android and combined them in to one. Instead they have gone to such great lengths to clone the iPhone that the i5C sits in a limbo between style, function and affordability.

Those of you who are interested in buying a GooPhone i5C will want to head over to the official GooPhone.cc website here where the phone is on sale now for $119.99.

Next Android v4.4 KitKat unofficially brought to the Xiaomi Mi2!