OnePlus begin to leak teaser details about the OnePlus One flagship smartphone, first fact is it will have LTE and will support a wide number of categories!

LTE was already the only fact that we officially knew about the OnePlus One smartphone, but today the young company confirmed the fact with details of which LTE categories the phone will support. 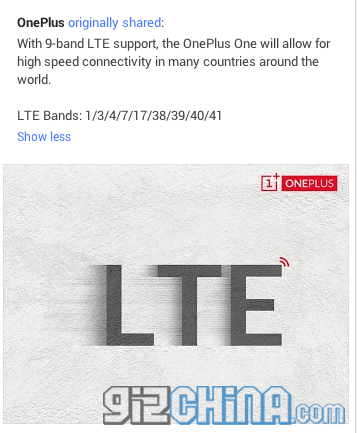 According the OnePlus Google+ plus post, the One smartphone will have support for 4G LTE bands 1/3/4/7/17/38/39/40/41. Those 9 bands cover most major LTE networks bar one! It looks like OnePlus don’t plan on offering a device which will play nice on Verizon in the U.S!

We can also assume that the OnePlus One will have WCDMA and GSM support. The phone is also rumoured to have a variant of the Snapdragon 800 (possibly the 805).

Previous Octacore Hike X2 is the first phone to ship with Mediatek’s rival to NFC!