Details of the Mediatek MT6795 flagship processor have emerged today boasting hardware which could make the Snapdragon 810 blush.

There has been a lot of talk recently of Mediatek’s new 64bit processors having enough poke in them to give SoC’s like the Snapdragon 801 a run for their money. Today, the Snapdragon 810 could be under threat as leaks detail features of the new Mediatek MT6795 chipset.

The MT6795 briefly appeared in a leaked roadmap from Mediatek last week. Now we have more detailed information and a better idea of what to expect from the new power house. 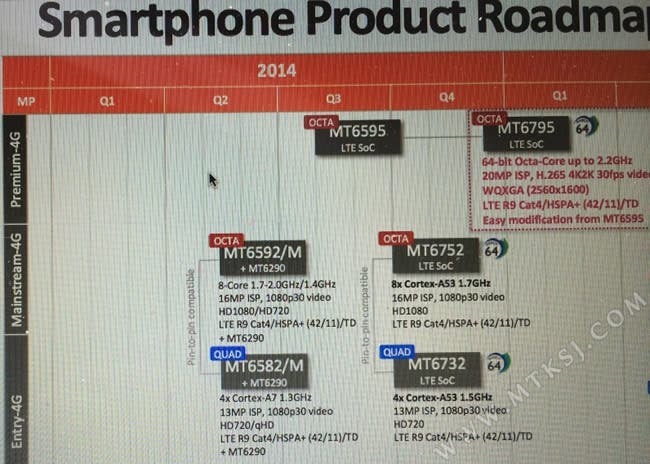 For the MT6795, Mediatek have gone down the same 28nm manufacturing processor but used a 64bit octacore set up made of Cortex A53 cores and A57 cores. The spec sheet claims the processor can run at 2.2Ghz, but we will likely see a faster model capable of around 2.5Ghz nearer to launch too.

The GPU is a PowerV G6200, similar to that found in the iPhone 5S, so we know it is good but we don’t know if it will be as good as the Adreno 430 which comes with the Qualcomm Snapdragon 810.

Dual channel LPDDR3 933Mhz memory is supported by the processor where as Qualcomm gets 64bit LPDD4F 1600mhz. Up to 2560 x 1600 resolution display will be supported by the next generation MTK chip, as will 20 mega-pixel cameras, LTE, Glonass, GPS etc. What’s more the MT6795 is pin compatible with the MT6592 so the upgrade should be quick and painless for most current phones.

Mediatek are stating a launch date of the end of 2014 meaning Q1 2015 flagship Chinese phones are going to be packing these beauties!

Do you think with processor like the Mediatek MT6795, Qualcomm should start to worry?

Next Nubia Z7 Mini vs OnePlus One