The Meizu MX4 launched a little over 2 months ago and as you may already remember Andi managed to review the phone and put it through its paces soon afterward. You may also remember that phone was a pre-production sample and now that we have a production model we though to re-visit the MX4 once again for a recap.

The Meizu MX4’s design and build quality is exquisite, especially when considering the Chinese retail price it was designed to meet: Roughly $280 / €230! The design language used for the MX4 is the same used on the Meizu MX3. It’s very straight forward, simple and feels like a fresh breeze of elegance. While other phones try to be an eye-catcher with outlandish design elements, Meizu keeps it clean and structured with only a very few buttons and soft colors.  This is what gives the phone its “love at first sight appearance”.

Meizu used a 15:9 screen ratio with the MX3, instead of the usual 16:9 we find on other handsets and this has been carried over to the MX4. The new phone boasts a larger 5.36-inch screen now, it sounds large on paper but in the hand it is as easy to handle as a 5-inch phone.  The 15:9 ratio makes it much easier to reach every corner of the screen with one hand, while even giving you some more space to make use in portrait-mode. The phone dimensions keep the body to a minimum thanks to extremely slim bezels. 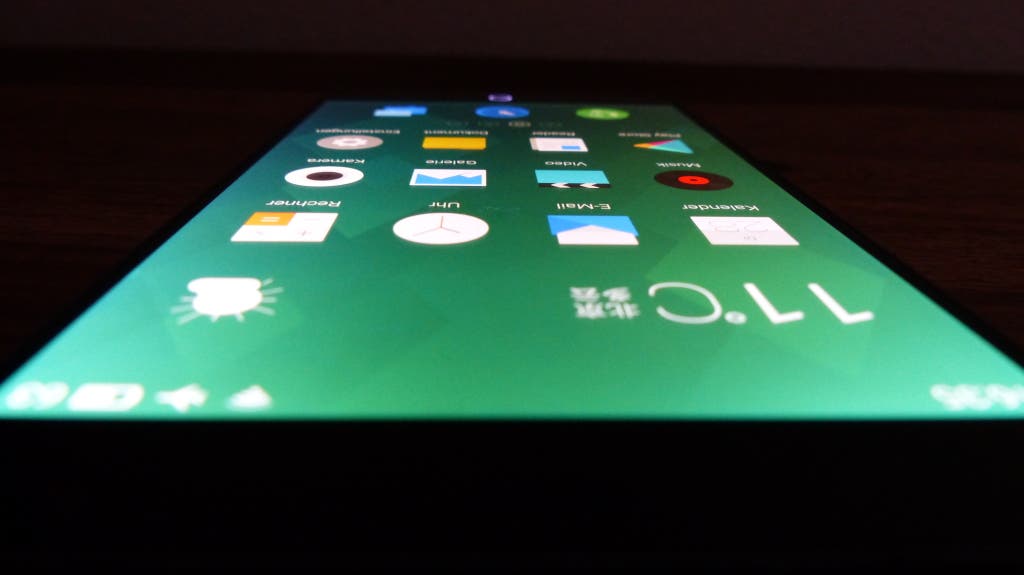 The resolution of 1920 x 1152 pixels is pure eye-candy. If you love vivid colours then you will love the MX4 display. Personally I think it is one of best screens we have seen this year on a Chinese flagship phone!

It’s time to forget everything you know about Mediatek chipsets so far. The MT6595 which comes in the Meizu MX4 is what we call a game changer. Its performance can easily keep up with any Snapdragon 801 phone, even though it can’t quite reach levels in benchmarks. In actual usage there aren’t any apps or current games that would be too much trouble for the MT6595 , just as it is the case with a Snapdragon 801. Modern Combat 5 on highest settings? Running fine! 4k videos? Running fine! 4k videos played in window-mode while surfing the internet? Still running fine! You get it, right?

Once again Mediatek have upped their game and problems in the past are solved with the new MT6595, well at least in the Meizu MX4. The MX4 actually does a perfect job receiving GSM, 3G, 4G, Wi-Fi and Bluetooth signals with this new SoC. We actually encountered only very few phones which had such an amazing reception quality to offer as the MX4 did. Truly outstanding and totally on-par with the expensive flagships of this world.

Most amazingly for a  Mediatek phone is the GPS performance which is like nothing we have experienced before!  The SoC supports GPS, A-GPS, GLONASS, QZSS and BDS, pushing it once again on-par with any Qualcomm, Samsung or HiSilicon SoC. Fix times of sub 3 seconds with an accuracy of below 1 meter and sat counts of 21 are finally a thing of reality for Mediatek based phones.

Running Flyme 4, the Meizu MX4 is totally up-to-date with the latest Meizu-made custom ROM. Rather than being a major overhaul, Meizu managed to retain the Flyme user experience we all got to love with the Meizu MX3, but pushed it a little forward with fine-tuned features, design-elements and animation. Flyme 4 can easily be described as one of the most easy to use and beautiful Android custom ROMs in this colorful world of mobile technology. Those new to smartphones will quickly fall in love with Flyme 4, and advanced users will get to grips in no time. There still are a few bugs here and there, but regular updates mean we have no worries.

Meizu dropped the dedicated Wolfson audio processor we found in the MX3, as the MT6595 features a Wolfson DAC out of the box. In addition to that, Meizu implemented a NXP Smart PA 2.0 audio enhancement chip, which is optimises your tunes in real-time, making sure every track sounds the way it should, without having to fumble around with equalizer settings. This works amazingly well, both through the internal media speaker and the headphone jack. Meizu also managed to double the internal speaker’s volume, making the MX4 one of the loudest handsets we’ve ever got our hands on. A little annoying though: The strong audio signal sometimes is too much for cheap headphones. High-end earbuds are a must for the MX4!

Featuring a Sony IMX220 Exmor RS 20.7 mega pixel sensor, the Meizu MX4 promises to offer outstanding image quality onhe cheap. Can it keep up with the high expectations? Well, it probably depends on your taste. While it for sure creates the sharpest images we’ve ever seen coming from a mobile device, has pretty much no issues with complicated lighting situations and has a surprisingly little rate of failed pictures, it also has a few downsides which some might not like.

First of all the color reproduction isn’t as intense and warm as some (including us) would’ve liked it to be. Pictures sometimes are looking rather realistic than beautiful, which can be a pity in certain situations. Another thing we dislike is the LED flash. It just isn’t quite as bright as the one we got to experience in a Vivo Xshot or Oppo Find 7, yet the camera does show significantly less amounts of noise. The last thing we found quite annoying is the 15:9 ratio of recorded videos, to make them fit on the MX4’s screen. While this is nice to have on the phone, it certainly isn’t on other devices: Most players refuse to open up the files!

Packing a 3.100mAh battery, the Meizu MX4 is well equipped. While the battery life might not seem as outstanding to you while using the phone on “performance mode”, you will quickly realize, that you can squeeze 2 to 3 days of battery life out of this handset by switching between the power saving plans on demand. Charging time is average with 2 to 2.5 hours, but can be cut in half when charging the phone while being turned off.

While the Meizu MX4 might not be the flagship Meizu phone you expected, you will soon feel it is well on par with current flagship after getting it in your hands!

The build quality, the screen, the performance and the camera makes the Meizu MX4 not just a great upgrade, but a real successor of the Meizu MX3. These days it still is a little expensive with prices of up to $491 for the 32GB model, but as soon as prices go down (which should happen before Christmas), the MX4 has the potential to be one of the most attractive Chinese phones available.

One big question left is: Should you wait for the MX4 Pro or buy the MX4 Standard? We say: Go for Standard! It really is powerful enough for pretty much everyone and just is an amazing handset – that simple. Only those of you, planning to keep the phone for years to come, thus in need for a more powerful SoC, and in need for an even larger screen, should go for the Meizu MX4 Pro.

That being said, a big thank you to Antelife for providing us with the final version of the Meizu MX4.

Previous Xiaomi to take on GoPro in the action camera market?