Each time we do a story on MediaTek (or any of the phones powered by the new MediaTek chips), we get convinced all the more that MediaTek’s going to rock 2015. The MT6732 64-bit chip has only arrived (so has the higher-end MT6752). According to a report from China, MediaTek has already listed another chip — the MT6753 — in the mid-range category.

Seen below is a chart depicting the specifications of this new SoC. It comes with an octa-core CPU with Cortex A53 cores clocked between 1.3GHz and 1.5GHz. The SoC comes with support for up to 1920 x 1080p displays, and has ability to encode photos from 16 mega-pixel camera sensor and video up to 30fps @1080p. 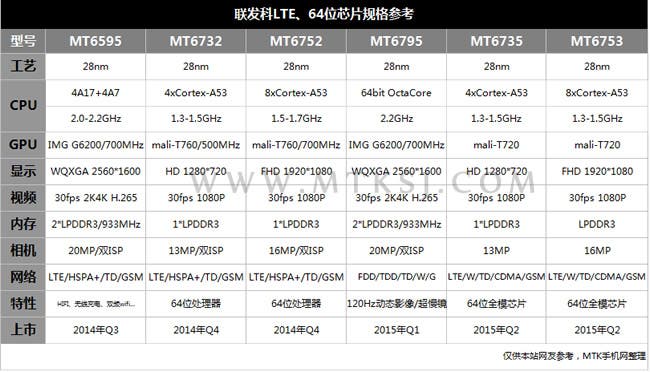 Also seen alongside the MT6753 is the MT6735 chip which we first saw powering the Alcatel OneTouch PIXI 3 series phones back during the CES. With MediaTek killing it with their 64-bit offerings (many have found them to be better performers than their Snapdragon counterparts) the way they are, do you think 2015 will belong to MediaTek? Let us know what you feel about this in the comments section below.

Previous Is the OnePlus One shipping without Cyanogen branding now?