Unbelievable as it may sound, but China has a new smartphone maker and a new flagship phone to get excited about! Here is everything you need to know about the Manta 7x.

You may remember that we briefly covered details of the Manta 7x in a post last month. At the time many of the specification details were unknown, but we did learn about the Manta’s unique touch borders which remove the need for any physical buttons.

Now final release details, specifications and pricing for the Manta 7X have been released we can revisit this unique flagship phone in more detail.

The Manta 7X looks very much like a Nexus device in the official renders on their website, and that is certainly a look that we really like. Manta will releasing two versions of their phone, the Manta 7X is what we will focus on in this article as details of the Manta 7L haven’t been released yet. 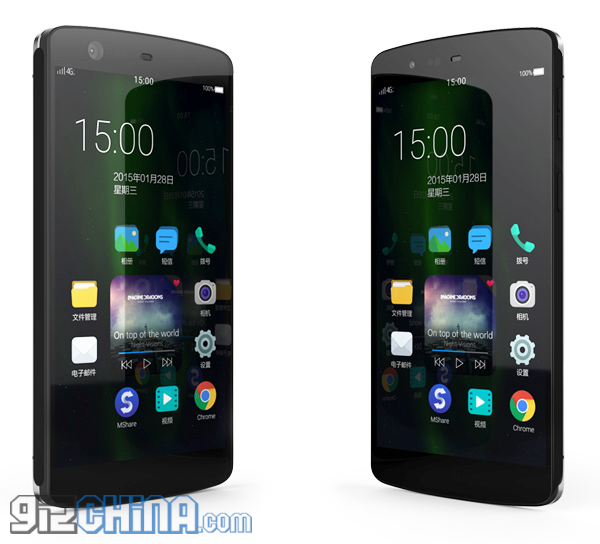 Manta really are hoping to grab the attention of Android smartphone users who appreciate good specifications, a nice design and unique features. They are not trying to emulate Xiaomi, or Meizu, and like Huawei are concentrating on the mid-range and high-end smartphone user, but being a small manufacturer the time it has taken to get their phone to market has meant some of their ‘flagship’ specifications are starting to look a little dated.

A Snapdragon 801 2.5Ghz, with 2GB RAM still provides a lot of grunt and even today will run every application you could possibly want without a stutter or second thought, but with the improvements we have seen from Mediatek and the SD 810 coming soon, it’s all quickly becoming last generation tech. 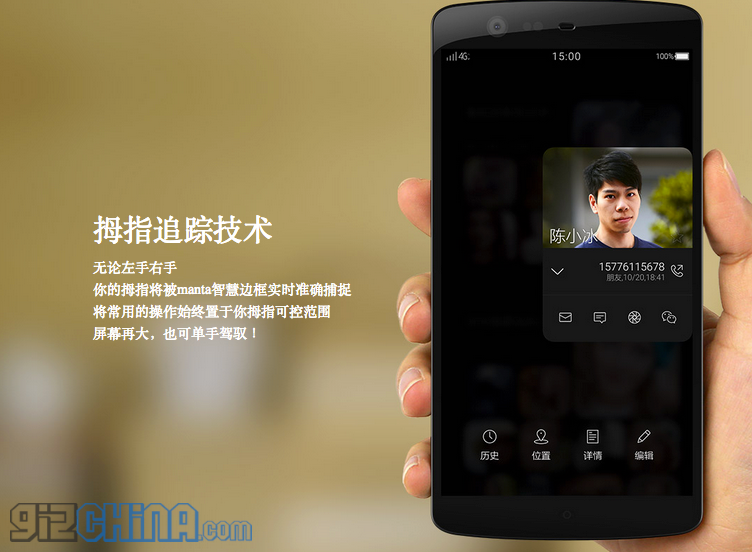 Manta have opted for a 5.5-inch 1920 x 1080 FHD Sharp display. Again, this isn’t 2K that we see on the Meizu MX4 Pro, or rumoured to be on the second generation OnePlus phone, but in my tests 2K isn’t a feature I need from a phone. The specs say the glass panel has an arc design meaning a smooth transition from the edge to the center of the phone. We have seen this in the Xiaomi Mi Note and the IUNI U3 and really love the way it feels.

Phone weight is 200g which is way heavier than the competition but also does include the huge 4200mAh battery good for claimed 35hours of 3G talktime, 654 hours LTE standby or up to 138 hours of audio playback. 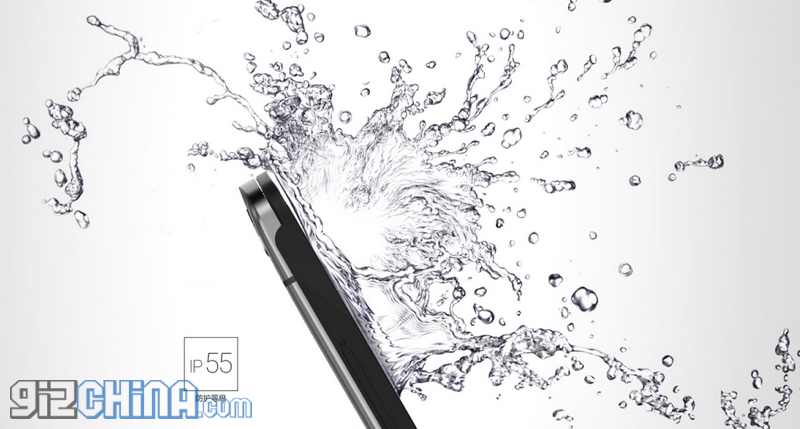 Dimensions are 151.3 x 76 x 9.8mm which give the screen an overall coverage of  74.96%. The thickness is also really quite impressive considering the size of the battery, however just single SIM support and relying on the 32GB of internal memory. The phone is also IP55 certified for peace of mind, with all metal rear panel and chassis. 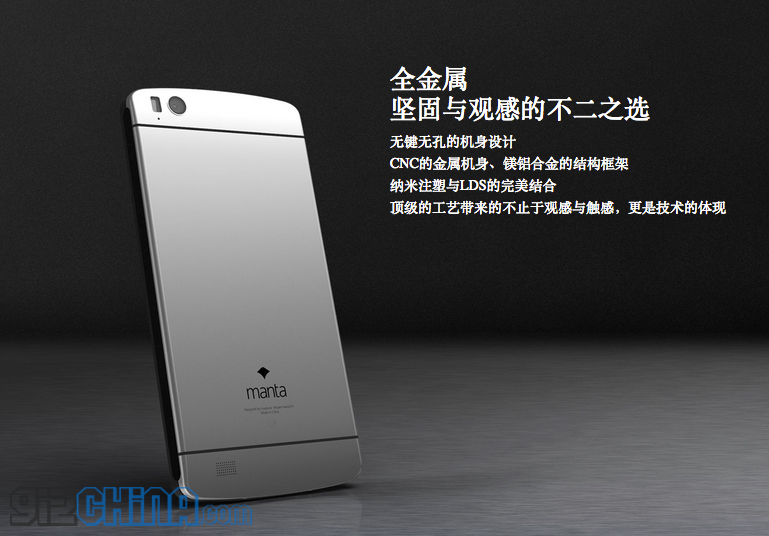 A micro SIM allows network support for TD-LTE, FDD-LTE, WCDMA and GSM. Full network details such as bands aren’t listed yet (not that we can see anyway).

Camera specifications on the Manta 7X include a 13 mega-pixel IMX 214 sensor from Sony with F2.0 aperture and OIS. The front facing camera is equally good also being a 13 mega-pixel Sony IMX 214 and again with OIS!

If you read our previous report then you will already be aware that one of the main features of the Manta 7X is the lack of physical button. There is no physical power button, volume rocker or home button. The home button is a capacitive unit below the screen which we have seen for year, but the edges of the Manta 7x house touch sensor for powering the phone on and toggling the volume. Even a finger print scanner has been positioned in the side of the phone for security too. Touch sensitive bezels are quite a unique selling point, with some real potential for nice gesture control options, at this point we are not sure what options are included but hope to get our hands on one for testing. 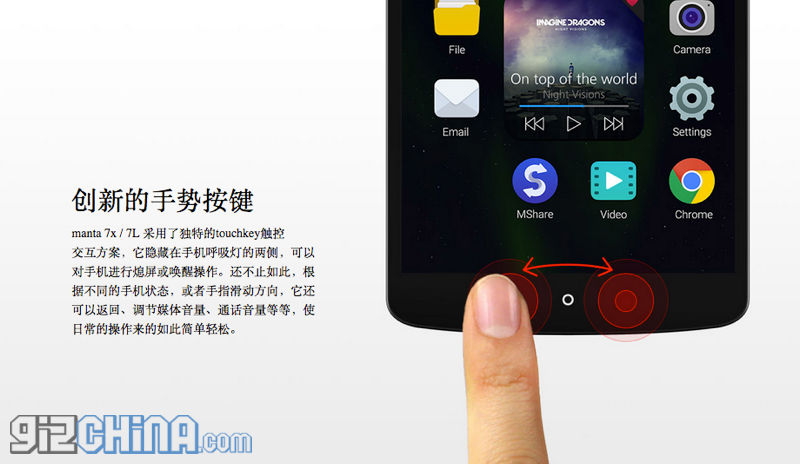 Manta have also developed their own Android ROM named M07 OS. Based on Android 4.4.4 it come preloaded with Chinese and English languages plus a few choice applications. The system makes use of the side touch panels for easy transfer of files and navigating through menus. 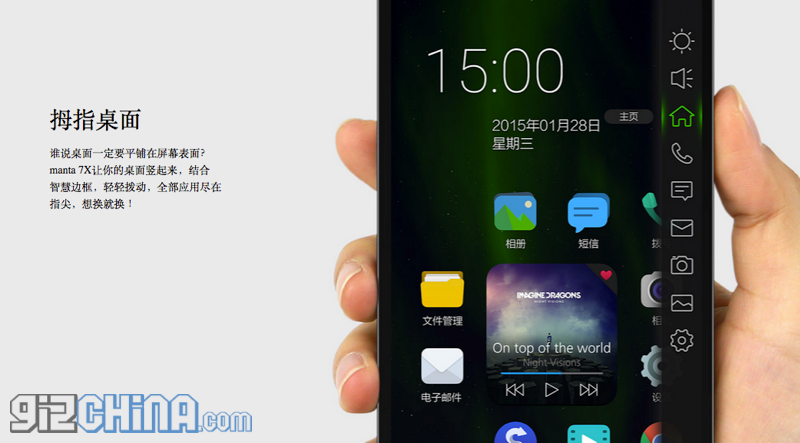 The Manta 7X is a great looking phone with some nice features and powerful hardware, if not of the latest generation. With English in the ROM, WCDMA and FDD-LTE, international customers do have the option of trying to import the Manta 7X, however it’s availability and pricing which might put you off.

Currently Manta are only selling the 7X through their Chinese only website, and pricing is high at 4080 Yuan ($652), that’s almost double the cost of a phone with similar processor and screen. We also have to see how much support Manta will be offering their phones, as the company are still relatively new.

If you do like the design of the Manta 7X though, keep posted for details of the Manta 7L which is rumoured to be a similar phone only running Mediatek hardware for a more affordable retail price.

Previous Mlais M9 Review: There, but not quite!