It appears there is no love lost between ZTE and Meizu, as the global phone giant attack the Zhuhai based phone maker with launch invitations for their latest ZTE V5 model.

There is a rumour that the reason Meizu has hand to release a whole new range of slightly updated models with physical home buttons is due to a failed legal battle against ZTE. We’re still unsure is this is 100% accurate but it might go to explain why ZTE are now attacking Meizu with their launch invitations.

Recently, Meizu sent out invitations for the release of the Meizu m2 along with a retro Nokia 1110. It’s hard to understand the logic behind the gesture, but we stopped trying to make sense of Meizu marketing a long time ago. 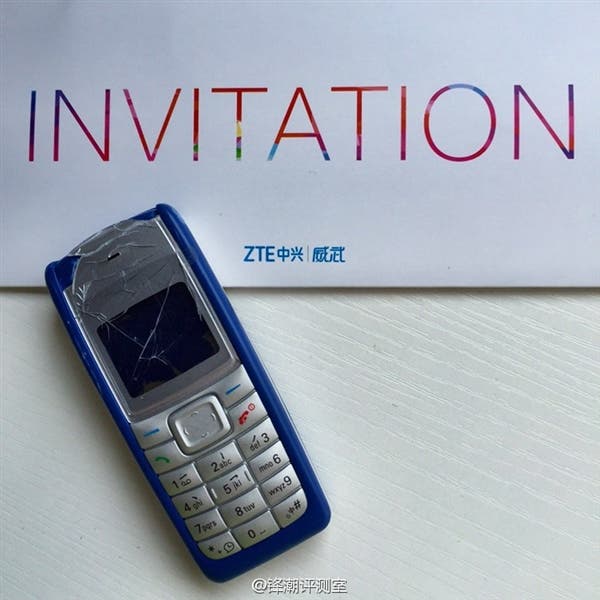 Whatever Meizu were trying to get across though, ZTE what the image destroyed and have send their own invitations with a smashed Nokia 1100.

ZTE are obviously quite set on simply destroying the launch of the Meizu M2 and must believe that they have the device to do it in the latest ZTE V5 model.

As the Meizu m2 is a 599-699 Yuan phone, this could point to a similar price tag for the all alloy ZTE V5 we saw in leaked photos a few days back complete with rear fingerprint scanner. Just the use of alloy and a fingerprint scanner at such a low-price would be enough for must Chinese buyers to opt of ZTE over Meizu.

Whatever these messages mean, we will learn the full details of both new phones towards the end of the month.

Next UMi Hammer S will cost $129.99 with USB Type C and fingerprint scanner