It’s been some time since we’ve heard or talked about the Huawei made Nexus phone that’s supposed to be out in the coming future. If you’re one of those people who’re missing out on the action, well, here’s some news for you.

The Huawei-made Nexus phone has just made an appearance on the GFXbench database, with more than just a few details on offer.

First off, the benchmark listing confirms the resolution on the 5.7-inch display to indeed be the 2K/QHD 1440 x 1560p that everyone had been talking about. This means that this year’s Nexus will have an even greater pixel density than last year’s Nexus 6, which had a 6-inch screen with the same resolution. 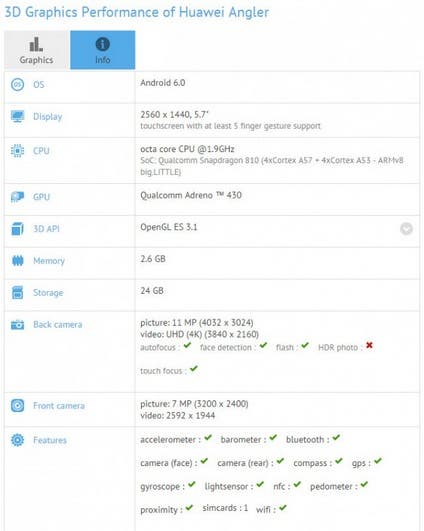 Moving on, the GFXbench listing also says that the Huawei Nexus will indeed be powered by the Snapdragon 810. It’ll operate at 1.9GHz through its eight cores, and with 3GB of RAM and 32GB of ROM, will make for the phone’s heart.

An obvious piece of info that the listing also mentions is the Android version — which will be 6.0 Marshmallow.

The front of this Huawei made Nexus phone will have, besides of course the high-res screen, an 8 mega-pixel front facing camera to go with the rear which should be 13 mega-pixel (although GFXbench lists it as 12 mega-pixel).

So if you thought the Xiaomi Mi Note Pro didn’t have enough developer support, this Huawei Nexus might be something you’ll be interested in. This 5.7-inch phone is expected to go official with a 5.2-inch version by the end of this month, on 29th September.

Next Bluboo say ‘No’ to presales, all Bluboo Xfire orders get immediate shipping

MAZE Holiday Sales Are On Just as Santa is Gone!