OPPO’s refresh to the existing R7, the R7s is scheduled to launch later this month at an event in Dubai.

From the sound of it, OPPO seem to be in a mood to give the R7s a rather grand launch. The unveiling will take place at Gulf Information Technology Exhibition (GITEX) in Dubai on the 18th this month, while the exhibition itself will go on till the 22nd.

“The R7s will offer consumers a bigger battery, a larger screen and double the storage space of the R7, all the while boasting the full-metal unibody and stellar photo-taking capabilities of its predecessor,” OPPO added. 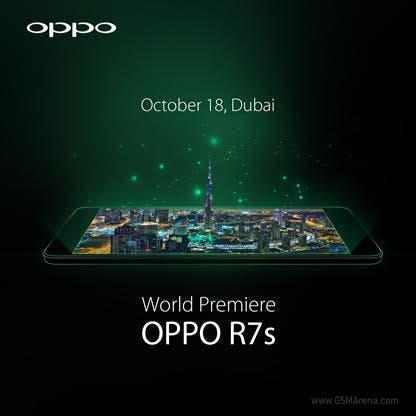 OPPO has long been due for their flagship launch, the OPPO Find 9 which is expected to make an appearance sometime before the end of this year.

Previous Yu Yutopia the “Most Powerful Phone on This Planet,” says founder

Next Doogee claims it has produced the most smartphones with 2.5D glass