Pepsi, yes the same brand that makes carbonated soft drinks, is set to launch a smartphone in China named the Pepsi P1.

You may have missed it but this is actually the 2nd time Pepsi have been connected to a smartphone. The first being a custom Oppo phone with Pepsi launcher and wallpapers. This time though the Cola company have gone a few steps further and worked with a manufacturer to create it’s own Android smartphone.

As you might expect, the Pepsi P1 is a little behind the times in terms of overall specifications and will actually launch in China with a Mediatek MT6592 chipset and 2GB RAM, hardware which would have been respectable in 2014 but a little dated today. 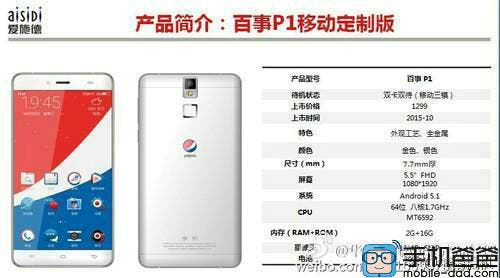 Other details include a 5.5-inch 1920 x 1080 display, 16GB internal memory, 13 mega-pixel main camera, 5 mega-pixel front, and 3000mAh battery. The most exciting detail might be the fact that Pepsi have managed to get an Android 5.1 Lollipop build on to the MT6592 chipset, while other companies say it won’t happen.

Official pricing hasn’t been announced but a launch date of 20th October seems like the date the final details will be announced.

Previous Doogee brand out with the Doogee Vienna earphones