Following in the footsteps of OnePlus marketing, UMi are asking Elephone P8000 owners to smash their phones for the chance of getting a Free UMi Iron, however there is one very important difference between the UMi Smash and the promotion OnePlus held.

Back at the start of OnePlus, the start-up company asked fans to smash their current phones to receive a free OnePlus One. OnePlus asked fans to first apply for the smash and only to take part once their place in the promotion had been secured. The idea meant that only people guaranteed a OnePlus One would then smash their old phones on video. On a whole though the promotion was deemed ridiculous by many but did result in plenty of hype for the then new brand.

After seeing OnePlus perform this, UMi have decided to recreate the promotion a year on but this time things are different.

So what UMi are basically asking is for Elephone P8000 owners to video themselves smashing their phone in the hopes that they will be chose to receive a Free UMi Iron Pro. Anyone not chosen will get %50 off an Iron Pro, in effect you will be throwing money away no matter the outcome!

The promotion is sure to bring a lot of attention on to UMi, but we feel most of it will be negative. It was a stupid idea when OnePlus tried it, and it is even worse with UMi’s new rules. 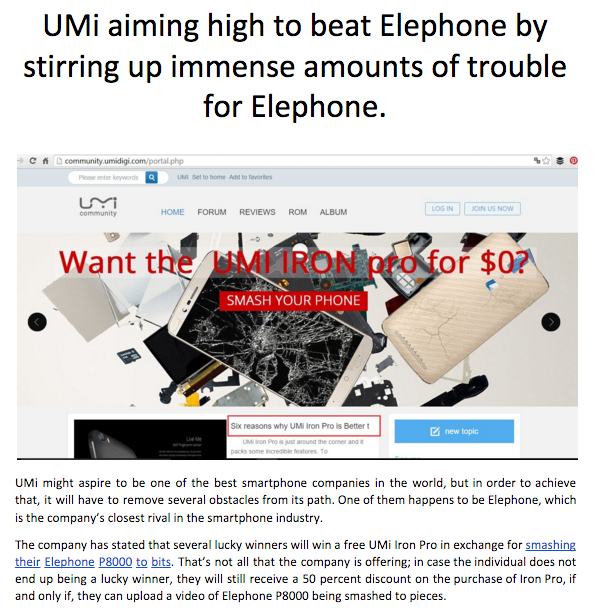 This is just our opinion though. Are there any Elephone P8000 owners out their who are seriously contemplating this? We reviewed the Elephone P8000 earlier this year, and I have to say it was a good enough phone for me to what to keep in perfect working order rather than smash it apart, how about you guys?

Next The Elephone Ivory is another $99.99 phone due this month